BYU men’s soccer ends their season with a 1-0 win over FC Tucson. BYU traveled to Tucson, Arizona to compete against FC Tucson on Saturday night. This was BYU’s first away game after being able to play three consecutive home games. 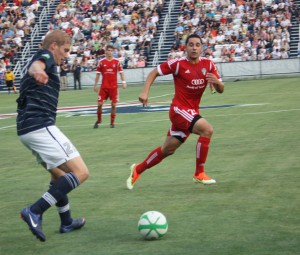 BYU stepped out on the field feeling confident. BYU had played FC Tucson at home just two weeks prior to Saturday’s game. BYU played strong and defeated FC Tucson 3-2. BYU knew it would be a tough game because FC Tucson has many talented players and playing on their home field provides even more energy for them. Luckily, for the Cougars they had their own fan section cheering them on.

“The game was well attended, we had a lot of support from BYU alumni which was cool; they even brought a banner,” Jake Petersen said.

The first half of the game was a constant back and forth battle between both teams. BYU and FC Tucson both had opportunities to score but neither finished. Defensively, BYU communicated well with one another to position themselves well and stay with their marks in order to hold off the FC Tucson’s strong offense. The first half ended 0-0. After the deadlocked first half, BYU was determined to score.

“We went back and forth. I scored in the 53rd minute, Jonathan Junca shot it on the top of the 18 yard box, the ball was deflected; I followed the shot and finished,” Jace Green said.

After scoring BYU focused on defending their goal. In the last few minutes of the game, FC Tucson was awarded free kicks and corner kicks. FC Tucson had several opportunities on goal, putting a lot of pressure on BYU goalie, sophomore, Jake Petersen. BYU’s starting goalie Brian Hale was not able to make it to the game, but Petersen stepped in and was able to make several saves which led BYU to their 1-0 victory.

“It was a last game all the way through from the start to the finish,” James Bindrup said. “The last couple minutes were a nail biter. We’re really happy about the win.”

BYU finished their season 6-6-2. The Cougars are very happy with the season’s outcome, head coach Chris Watkins calls the season, “one of our best in five to six years.” BYU men’s soccer has one more week of camps coming up and then the boys will have a well deserved break for a few weeks. The team will return at the start of fall for their preseason play. The team looks forward to keeping a majority of their current starters and have several new recruits who will bring a new energy to the team.