BYU men’s soccer defeated the Pali Blues 5-1 Saturday in a game that began late because of a lightning warning by Brigham Young University. 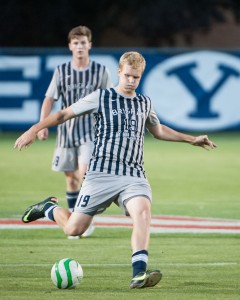 BYU came out strong in the first half. Although the score was 0-0 at halftime, BYU had more shots on goal and better possession of the ball. After missing nine attempted shots BYU was determined to score in the second half.

“We had a lot of chances, and it took awhile to start scoring, but once we did we wore them down. We were confident that the goal would come; we weren’t in panic,” Clark said.

Frischkenecht, known as the “new hero of the team,” provided another assist later on to forward Jonathan Junca, who scored on a one-on-one versus the Pali Blues goalie. BYU was comfortable with its 4-0 win and began to focus on defending its lead. But when Matt Rider saw his opportunity he attacked the goal and scored, unassisted

The game was almost a shut out. In the last minutes of the game, the Pali Blues scored off a penalty kick. BYU ended the game 5-1.

“It’s fun to score five goals in front of a large crowd,” BYU head coach Chris Watkins said. This win adds to the Cougars’ record of 5-6-1.

International students won’t be having a blue Christmas

The Festival of Trees provides festive way to help children