May 10     A report was taken by campus police involving possible phone fraud at the MTC. The incident occurred on April 25 and an investigation is ongoing.

May 3     A person was arrested for being in an unauthorized area of the Marriott Center at 5:13 p.m.

May 8    Damage to a bench at the ASB was reported. The grounds crew was contacted for repairs and repainting.

May 9     A group was reported in the act of damaging property in an NCAA area. The people involved were removed and the grounds office was called to initiate repairs.

May 3-10  Eight bicycles were reported stolen during the week. Two were reported to be unsecured at the time of the theft and the other six were locked or secured. Additionally, a bike seat cover was stolen from the racks at the JSB on May 6.

May 8    Provo police officers and detectives responded to the Branbury Apartments, 425 W 1720 N, on numerous reports of vehicle damage and vehicle burglary. The unknown suspects took a set of golf clubs from the trunk of one vehicle and then used them to hit the windows of five other vehicles, causing significant damage.  It is believed that this occurred between 1:15 a.m. and 6:30 a.m. 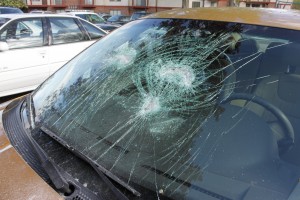 Provo police detectives are asking anyone who has information regarding this incident to call Detective Payne at 801-852-7280.