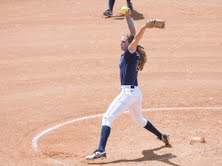 The Cougars were at it again Saturday afternoon as they faced the Utes in the softball Deseret First Duel. BYU swept Utah in Provo at the Gail Miller Field, finishing the game with a final score of 4-2.

The Cougars also suffered a great loss, however, when senior shortstop JC Clayton had to leave the field in the seventh inning due to a possible ACL injury. Clayton was chasing down a Ute in a pickle between second and third base. As she went one way to catch the opponent, her knee went the other way. She immediately dropped to the dirt, clearly in a lot of pain. Clayton was helped off the field and shortly after, her team won the game 4-2 to close out the regular season.

“JC is a huge part of our team,” Pitcher Tori Almond said. “She is a big leader, so we are just hoping for the best and that she’s ok. That would be a big loss.”

BYU head coach Gordon Eakin struggled to enjoy his team’s rival victory over Utah while also suffering the loss of Clayton, one of the greatest leaders, and the heart and soul of the team.

“You don’t want to lose any of your players,” Coach Eakin said, “but that’s the one player that just devastates this team. What a terrible time in a great player’s career to have just a freak accident like that happen.”

The terrible accident put a damper on the entire team’s victory. The Cougars played a great game against the Utes getting two runs in the bottom of the second inning to get a 2-0 lead. BYU freshmen Coco Tauali’i hit a home run in the second inning, as well as sophomore Megan Arnold who homered in the bottom of the fourth. This was Arnold’s second home run of the season and helped the Cougars extend their lead.

BYU pitcher Tori Almond almost single-handidly shut out Utah in a five-inning, two-hit shutout. Pitcher Hannah Howell came in for Almond in the top of the sixth.

“I should have kept Tori in for the whole game,” Eakin said. “I was really happy with the way we played right up until that last inning. I’ll take the responsibility for that, not that Hannah isn’t capable of coming in and closing out a game, she’s more than capable. But you give the other team a lift when you take a pitcher out after five innings.”

Almond is currently injured, but is still able to pitch and has led the team to many victories.

The Cougars await Sunday’s regional announcement to see where they will play next.