BYU men’s soccer will travel to Los Angeles on Tuesday, May 7 to square off against the OC Blues in their PDL regular season opener.

BYU finished exhibition play on April 13 with a 2-0 victory against Colorado Mesa University at South Field. The win improved BYU’s preseason record to 4-2.

The game against the Blues kicks off a two-week, four-game road trip for the Cougars. They are 1-2 on the season so far on the road, the only win coming against the University of Portland early in April. 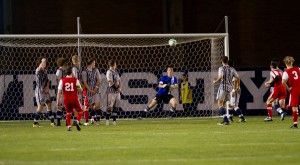 The Cougars were able to shutout the Blues last year on South Field, 5-0. With only half of the roster returning this year, including goalkeeper Brian Hale, the team will look to have a repeat performance of last year. The OC Blues are currently 0-1 in PDL play, the solitary loss coming against Ventura County on Saturday.

Since joining the PDL in 2003, the Cougars have qualified for postseason play only twice, both times losing in the Conference finals. BYU is hopeful this year will be different and look to start off the season with a victory.

The team won’t return home until May 31 when they play the LA Misioneros on South Field.