BYU Baseball will host the University of San Francisco Dons this weekend in a three game series critical to conference tournament standing.

The Cougars (24-18, 10-8 WCC) currently hold the fourth and final spot in the tournament and have a one-game lead over Pepperdine and San Diego with six conference games to play. The Dons (30-19, 14-7 WCC) come into the series riding a six game winning streak and have won eight of their last nine.

The Cougar offense is led by Jaycob Brugman with nine home runs on the season and Jacob Hanneman, who is in the midst of a nine game hitting streak. Adam Law leads the team with a .346 batting average.

BYU will retire the jerseys of hall of fame coaches Gary Pullins (no. 1) and Glen Tuckett (no. 20) in a ceremony prior to Saturday’s game. Pullins managed the Cougars for 22 years, leading the team to seven WAC titles and a No. 1 ranking during the 1981 regular season. Tuckett won 445 games over 18 seasons with BYU and led the Cougars to two appearances in the College World Series. Both coaches have been inducted into the Collegiate Baseball Hall of Fame. 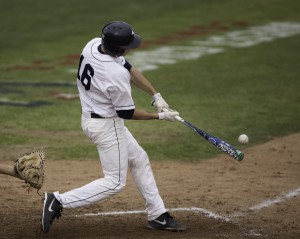