Social media owns some people’s time. They post, they tweet (and retweet), they like and they comment when we should be listening in class, studying or doing anything else. In fact, an Ipsos Open Thinking Exchange survey reported the average American spends 3.2 hours or more per day using social media.

According to a recent Pew Research Center survey, 83 percent of young adults ages 18–29 use social media platforms, and 67 percent of adults use Facebook.

Professionals and students are finding ways to capitalize on the industry and carve new and exciting career paths with all the interest in social media. 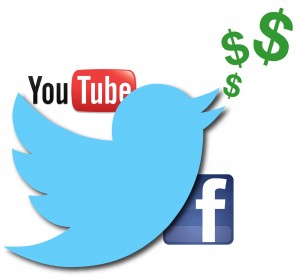 Salem Stanley, a BYU MBA student, founded Vacation Races to host half-marathons in scenic locations. He says all of his marketing tactics are executed through social media, specifically Facebook.

“I can’t imagine another medium that would allow me to target (my audience) that well,” Standley said. “(Facebook is) where the bulk of my dollars are going to go in the future.”

Stanley creates hype around his events by purchasing Facebook advertisements to appear on users’ pages. He says it helps him reach the people who want to participate in his races the most.

“That’s the power of Facebook,” Stanley said. “I don’t need an audience of a million people, I just need 3,000 people. So Facebook helps me find those 3,000 people.”

Stanley maintains that social media is a valuable tool because it helps him interact with his customers.

“My business is about so much more than the race,” Stanley said. “You can run a race anywhere. It’s much more about the bigger experience.”

Covington started his career with Sony BMG before social media began to boom, but soon afterward he had to learn how to reach fans via MySpace and other early social media platforms.

“I was told my department was being dissolved and that I would now be working in the new media division,” Covington said. “However, the fact that I was already using the internet for connecting with friends, keeping up on news and learning about new technology made the transition somewhat painless.”

Covington transitioned out of the music label business to help independent artists utilize social media and learned that more than just musicians were trying to tap into the industry.

“I discovered a whole world of people who were trying to figure out things I had already learned around social media marketing in the music industry,” Covington said. “With each client, there is an initial challenge in which you need to understand who their audience is … but once you have that down, a lot of similar marketing principles apply across industries.”

Covington suggests while there is a high demand for social-media-savvy marketers right now, the need may not last.

“At some point soon, social (media) will be just another part of larger marketing initiatives rather than its own thing,” Covington said. “I have to believe that the focus will shift from specifically social (media) to more general messaging.”

Clint Bishop is a mobile strategy adviser for The Church of Jesus Christ of Latter-day Saints’ Publishing Services Department and frequently utilizes social media at his job.

“I don’t know that there’s been a time in human history more focused on people than today. As of right now, it’s extremely relevant,” Bishop said. “The reason social media is pervasive is because it fulfills needs that people have had for a long time — those of expression, conversation, recommendation, debate, humor and more.”

Bishop agrees with Covington, however, that those interested in a social media career should diversify themselves.

“Social media marketing is all the rage, but the last thing the world needs is another self-professed ‘social marketing guru,’” Bishop said. “Having social media skills among your other marketing and business management skills is very much in high demand.”

Edgington said he makes about $1–$3 per 1,000 “monetizable views” of his videos. Monetizable views are counted when the viewer watches 15–30 seconds of an advertisement before the video.

At this point, YouTube is not the end goal for Edgington.

Edgington’s success opened unique opportunities for him. Good Morning America featured one of his videos on its show, and the Huffington Post interviewed him on Skype. Recently, Jimmy Fallon invited Edgington to perform one of his pranks on his television show.

While the social media industry may not be for everyone, it seems to offer another channel through which clever businesses can make money and offers students career possibilities that would not otherwise exist. And for some, those options may be worth looking into.