It’s that time of year again when every basketball fan becomes glued to the couch, forgoing lesser duties and responsibilities to find the excitement and glory in watching the NBA Playoffs. Following is a preview of the eight first-round matchups and predictions of who will move on to the second round. 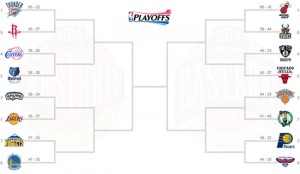 The Bucks are the only team in the playoffs with a losing record, going 38-44 on the season. The Heat went on a 27-game winning streak before finally losing, and they have won 37 of their last 40 games. This really will not be much of a series, as the three-headed monster in LeBron James, Dwyane Wade and Chris Bosh should overpower the Bucks and their talented guard play in Brandon Jennings and Monta Ellis, both in Miami and in Milwaukee. It will be a shocker if this series goes past four games.

This is a series between two hobbling teams. The Knicks have been injury-plagued over the last month, literally losing every big man over 6’8”. However, they have overcome the injury bug by being the best 3-point shooting team in the league, with dead-eye shooters like J.R. Smith, Raymond Felton and Steve Novak and the help from NBA scoring leader Carmelo Anthony. But they will need to get the big men healthy for this match-up with the Celtics in order to get out of the first round cleanly. Tyson Chandler and Amar’e Stoudemire will be big factors if they’re healthy.

The Celtics lost star guard Rajon Rondo to a torn ACL a few months ago and backup guard Leandro Barbosa to both injury and trade. But, unlike the Knicks, they have their big men intact, with Jeff Green, Brandon Bass and Kevin Garnett carrying the load on offense, with the help of star Paul Pierce.

This series will mostly come down to which team can stay the most healthy and, if the players are all sitting out with bruised bones, which bench can lead them to victory. In that case, I’ll take the New York bench. But will they have enough players to make it further?

No. 3 Indiana Pacers vs. No. 6 Atlanta Hawks

This is a fun playoff series between two teams that seemed to fly under the radar all season. The Pacers gave the Heat all they could handle in the second round last year, coming pretty close to eliminating Lebron and his boys from contention, but they just couldn’t keep up with the energy and star power of Miami. This year, they’ve added some athleticism in the form of Lance Stephenson, an energetic athlete that can run the floor. They also have a dynamic post duo with David West and Roy Hibbert, but star forward Danny Granger has only played in five games all year due to injury.

On the other side, the Hawks had a complete retooling of their team this last offseason, dealing star guard Joe Johnson to Brooklyn and Marvin Williams to Utah for Devin Harris and Lou Williams, who have each contributed greatly this year. The Hawks still managed to pull it off, making the playoffs again. But Atlanta has a tough road ahead if it wants to advance in the playoffs. It should be a fun series — perhaps the most interesting in the Eastern Conference.

Much has been spoken of Derrick Rose’s imminent return from his ACL tear during the playoffs last year, but he hasn’t returned yet, even though he’s been participating in scrimmages with the team at full contact and full speed. The question on everyone’s minds is if Rose will return for the playoffs. The Bulls still made the post-season without the former MVP, as Nate Robinson and Kirk Hinrich have filled in admirably, but the Bulls’ lack of a star player could hurt going up against the couple of stars the Nets have.

The Nets added Deron Williams a couple years ago and Joe Johnson this offseason, and made the jump to the playoffs. They have a solid team, with quality performances from everywhere. The Nets obviously hope Rose still rehabs that knee during this series, but the Bulls will give the Nets all they’ve got with or without him.

Prediction: Bulls win 4-3 (With or without Rose)

No. 1 Oklahoma City Thunder vs. No. 8 Houston Rockets

What a story this series could be. During the offseason, the Thunder lost James Harden, the third head of their “Big Three,” to Houston, who then led the Rockets to the playoffs for the first time since 2009. The Thunder, despite the big loss, picked up Kevin Martin and developed Reggie Jackson to go along with Kevin Durant and Russell Westbrook to actually improve to the No. 1 seed in the West from the second seed last year. There’s no animosity like King James returning to Cleveland a few years ago, but it’s still a juicy story.

The Rockets may be able to develop into a title-contending team in a few seasons with their stable of young horses who are developing, but the Thunder are too talented a team to lose more than one game in this series. And definitely not at home.

No. 2 San Antonio Spurs vs. No. 7 Los Angeles Lakers

Despite the L.A. drama that has enveloped this whole season, including the firing of Mike Brown after just five games, the continuation of the Dwight Howard saga and the addition of Steve Nash, not to mention the achilles tear of star Kobe Bryant, the Lakers have made the playoffs. Now the drama continues as the Lakers must take down the Spurs before moving on to the second round. The Spurs continue to defy age by turning out impressive seasons, and Tim Duncan still has a championship heart and body. With the achilles tear to Bryant, and the health of Nash still in question, can the Lakers overcome odds to add a whole new ridiculous level to the L.A. Story? I think not.

No. 3 Denver Nuggets vs. No. 6 Golden State Warriors

Despite any personal affiliations or feelings, the Nuggets are a fun team to watch. They are arguably the fastest team in the NBA, sometimes scoring before the shot clock hits 20. In fact, this series might be the most fun of any series in the first round to watch. A trip to the bathroom or the refrigerator could result in missing three or four baskets. The shot clock may not even come to play in this series. Ty Lawson leads the Nuggets in their fast-paced offense, but Andre Iguodala and Kenneth Faried finish it.

On the other side, Stephen Curry, who may still feel snubbed by the All-Star Game, may be the best pure shooter in the league, and he leads an offense of other pure shooters like Klay Thompson and David Lee. If the Warriors get hot, they can be tough to beat. On the other hand, the Nuggets have the best home record in the NBA, at 38-3, and, with the homecourt advantage, will get out of Denver with a win.

No. 4 Los Angeles Clippers vs. No. 5 Memphis Grizzlies

This is a rematch of last year’s 4/5 matchup, with just the seed number switching. Last year, the Clippers had some improbable comebacks, resulting in a series comeback to advance to the second round for the first time since 2006. The Clippers have added some help to stars Chris Paul and Blake Griffin in the form of Chauncey Billups, Lamar Odom and Jamal Crawford and look to be one of the best teams in the league, regardless of seed.

The Grizzlies made a midseason trade, giving up star forward Rudy Gay to acquire defensive star Tayshaun Prince. The move may pay off in the future, as it has cleared some cap space to go after some bigger targets the next offseason, but the Grizzlies may be at that point a little sooner than they would want, as the Clippers should roll past Memphis with only a couple speed bumps along the way.

The playoffs begin Saturday, April 20. Stay tuned for how close (or far) these predictions are and for the second round predictions.