The Cougars will be traveling to Tuscaloosa to compete against five teams. No. 3 Alabama, the defending national champion, will host No. 9 Utah, No. 15 Denver, No. 23 Kent State and Iowa State. BYU has come in second to Utah once this season, but beat Denver in a previous meet. BYU has not competed against Alabama, Kent State or Iowa State this season. 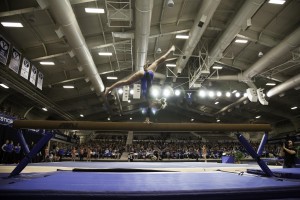 Of those six teams, two will receive an automatic advance into the national championship. The top-two all-around gymnasts will also move on to compete in nationals. Event winners will advance to nationals to compete only on that event if they are not already part of a qualifying team or the all-around competition.

The Cougars have scored extremely well this season, capturing seven scores above 195, the most since the 2005 season. The team placed 11th at the NCAA Championships during that year.

“Everyone is feeling pretty good (and) it should be a great meet,” coach Brad Cattermole said. “The girls have been practicing hard and they look good. They’ve worked hard to qualify and hopefully do well and see what happens.”

The Cougars will compete on Saturday, April 6 at 6 p.m. CDT at the Coleman Coliseum on the University of Alabama campus.