Masks have always been an important element of live theater, and for BYU theater students it is no different. For years, BYU theater majors have adopted the mask as a symbol of their coming of age in student-directed Mask Club productions.

The Mask Club is a forum for senior projects for theater majors at BYU. These plays are written or adapted by the student directors, who oversee the entire production, including running auditions and coming up with a budget. The 40-minute productions run throughout the year.

One distinguishing aspect of Mask Club productions is they are always followed by a talk-back session led by the director. This discussion between audience members and members of the production completes the educational experience of participating in the Mask Club. 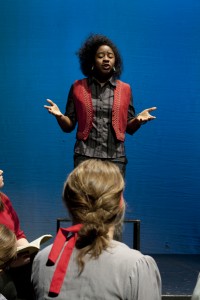 Ashley Parker, a sophomore and pre-acting major from San Antonio, was a cast member in the recent production of “The Crucible.” Parker said putting on the show in such a short amount of time is a challenge for actors trying to portray complex and developed characters.

“As an actor, it is difficult to have character development when you are only working with less than a quarter of the show due to cuttings,” Parker said.

Although many theater majors participate in mask clubs as a way to gain experience, any major can audition for mask club productions. While main stage productions involve many months of rehearsals and several performances, the Mask Club requires a smaller commitment from all involved.

“It is a short and fun thing to do,” Parker said. “A Mask Club is a great thing to participate in if you want the experience but not the huge commitment. As it is usually a small cast, you can develop some pretty nice friendships as well.”

Andy Foree is a senior majoring in theatre arts studies and has been involved in several Mask Club productions during his BYU career. Foree said he enjoys participating in the Mask Club because of the educational value for both participants and audience members.

Foree recently directed a cutting of the musical production “Songs for a New World.” Foree said one thing he had to get used to was directing fellow students.

“It is interesting to direct your peers because you have classes with these students and some of them are your friends, … (and) when you take on the role of director everything immediately shifts,” Foree said. “There is a definite disconnect from your friends and your peers in the show and you.”

However, Foree said he found that the actors were very responsive to his direction.

“Being a student director is really interesting,” Gremmert said in an email. “There is a sort of awkwardness in the fact that as directors, we really don’t know what we’re doing. Obviously, we’ve had some experience before, but this is our first time completely left on our own to create an entire production.”

Gremmert said although directing a production may be stressful, collaborating with others involved in the production helped her succeed as a director.

“The one nice thing about theater in general is that it is a very collaborative process,” Gremmert said. “Some days in rehearsal I would simply have to turn to my actors and say, ‘I have no idea what I’m doing. Someone help me figure out what to do here.’ Communicating freely with my cast about my exact thoughts and intentions for the play allowed everyone to have a voice in the process and lifted a little bit of the stress off my shoulders.”

Visit tmastudent.wordpress.com for a list of upcoming Mask Club productions.