The Greeks idolized Hercules and Achilles; Americans look to the heroics of Batman, Ironman, Superman and Spiderman. Superheroes play an important role in society, but the reason why is not always clear.

Several people have sought to explain the interest in superheroes as they study the complex nature of superhero ideology.

“Right now trust in the government is at an all-time low, and big businesses are failing,” Darowski said. “Superheroes act outside the bounds of law and offer certainty that someone will rise up and save everyone where government and other institutions cannot.”

Not only do superheroes give certainty, but they also provide scapegoats for several societal fears.

“Superheroes sublimate the fears and anxieties of the time period,” Darowski said. “Society projects those fears and anxieties onto the villain, and the audience enjoys a cathartic experience of seeing the hero overcome those challenges and leaves the story with a feeling that individual and the world’s troubles can be overcome.”

Another factor into why Americans love superheroes is the ability to relate to and project into them as a form of wish-fulfillment fantasy.

In “Superman on the Couch” by Danny Fingeroth, a book that explains what superheroes mean to society and the individual, wish-fulfillment fantasy is a powerful need and a main motivator for reading fiction. In the book’s words: “IF ONLY THEY (“whoever your ‘they’ may be”) KNEW THE TRUTH (“whatever that truth may be”) ABOUT ME (“whoever you believe yourself to be”) THEY’D BE SORRY FOR THE WAY THEY TREATED ME.”

Jacqueline Thursby, professor of folklore and English education, believes that part of the reason for superhero popularity is that Americans like imaginative entertainment.

“They enjoy the suspension of belief and excitement hero figures in films offer,” Thursby said. “We like to see variant presentations of familiar heroes. That is why we don’t get bored. It is fun and refreshing to find variety in the familiar.”

“Everyone, at some time or another, needs to be rescued,” Thursby said. “It might be rescue from illness, loneliness, too much work, etc., and hero figures provide temporary escape.”

Josh Melara, an avid superhero fan, believes that superheroes represent a standard to strive for and make ideal role models.

“Superheros are strong, successful, able to make the best of any circumstance, they get the girl, they kick butt and they always come out on top,” Melara said. “That’s like every guy’s fantasy and, if I could ever be even a fraction of that, I’d feel pretty good about myself.”

Superheroes motivate Melara to better himself. 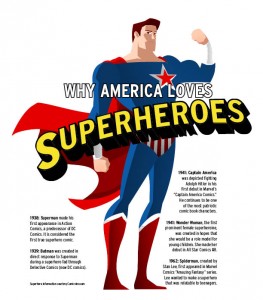 “Superheros like Batman are especially impressive,” Melara said. “He doesn’t have superpowers to rely on; he is just a man who has worked very hard to become what he wanted. It gives me the belief that even though I’m just a guy, I can become something great.”

Melara also said that superheroes have helped restore his faith in humanity.

“It’s exciting to see someone who has separated themselves from, and basically risen above, society choose to remain a part of it,” Melara said. “They are completely free to do anything they want and decide to put everything they have into helping others. It gives me hope that maybe people like that are really out there.”

Superheroes have become an important part of American society, and it’s predicted that, because of their adaptable nature, they will continue to be around for some time.

“Social media presents challenges on how to present superheroes but also presents the chance to do different things,” Daroski said. “Superheroes will most likely transition more onto other formats, and the stories will change slightly to reflect new conflicts of the time, but we will still probably always have some form of superheroes.”