The Transportation Security Administration announced on Wednesday, March 6, that it will be loosening its carry-on item restrictions.

Passengers can now carry on their ski poles, hockey sticks, lacrosse sticks and up to two golf clubs.

Passengers can also carry a small pocketknife as long as it fits certain restrictions:

1. It has to be shorter than 2.36 inches (6 centimeters) and skinnier than one-half inch at its widest point.

2. It cannot be a fixed blade.

3. It cannot have a molded grip.

Since Sept. 11, 2011, TSA has limited the items passengers can bring on their flights. The terrorists of Sept. 11 are thought to have used box cutters and small knives to intimidate the pilots and hijack the planes that crashed into the World Trade Center towers and the Pentagon. Potential weapons, such as sporting equipment, blades, tools and firearms, were immediately banned from carry-on luggage.

Since then, TSA has increased pilot safety by installing locked cabin doors and teaching pilots what to do in an emergency. These new safety procedures should make it impossible for a hijacker to control an aircraft with a small blade or a whiffle bat.

These new rules may be appealing to sports enthusiasts, but what about the average passenger? Carry-on space is already cramped. There is not ample room for ski poles and golf clubs. A pocket knife may not control an entire aircraft, but passenger violence or “air rage” is not unheard of.

People are more upset that the restrictions on water bottles and hair gel are not being loosened. The TSA blog team tweeted this on Wednesday: “Allowing 2.36 blades = good risk-based security. Can’t be compared to shoes or liquids.”

TSA hopes these relaxations will decrease the amount of security frisking complaints, but there is the possibility that the lines will be longer while people have to wait for an agent to measure knife blades. 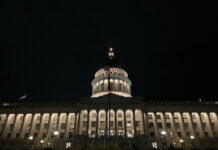 ‘Big Gulp’ at 7/11 as woman crashes into storefront