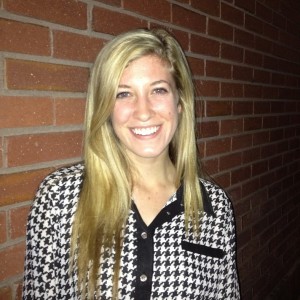 Let me start off by saying that I love Las Vegas.

I’ve called Sin City my home since fifth grade, and, despite the blazing hot weather and the worldliness of The Strip, I have the best memories growing up there.

But here’s the thing: I have no hometown loyalty when it comes to sports. BYU is the best; Gonzaga, Utah and UNLV are the worst.

My mom says I have a black-and-white, all-or-nothing personality — I either absolutely adore something, or I can’t stand the sight of it — and I wholeheartedly agree. If I have a favorite team, there’s no room for any other. Such is the case with BYU.

I’m completely obsessed with this school. From my arrival back in the fall of 2009 to now, every moment has prepared me with awesomeness to handle life’s little challenges, and that includes sports. I was inches away from the TV screen in September of ’09, when BYU beat No. 3 Oklahoma at Cowboy Stadium. I waited in a tent for every single basketball game during Jimmermania and was there when he rained down 52 points against New Mexico during BYU’s last Mountain West Conference Tournament. And I squirmed with happiness in the press box when Kyle Van Noy scored not one, but two defensive touchdowns against SDSU in the 2012 Poinsettia Bowl at Qualcomm Stadium.

Becoming a Cougar was an inevitable calling card of mine, and I’ve fully embraced it.

So it doesn’t really click in my head when I talk with friends who say yeah, they like BYU and all, but if their home team plays the Cougars, it’s home team all the way. It’s insulting to me that someone can switch loyalties so easily. I get it — you’ve grown up in one location all your life, living and dying by the success of the sports teams in your area, especially the nearest university. That’s great, really, so why don’t you just go to your home school?

BYU is my favorite school and is home to my favorite college sports teams, so attending this institution is merely an added bonus. I may be from Vegas, but I dislike UNLV more than any school out there. Yes, I have some good buddies who go there (most of my graduating high school class actually), but I do not like the school, especially its sports teams, one bit.

Funny enough, that hostility didn’t begin until I actually came to BYU. Before it had just been indifference.

I can peg the beginning of my dislike of the Runnin’ Rebels to one particular instance: Exactly three years ago to the day, March 12, 2010, UNLV beat BYU in Vegas at the Thomas and Mack Center 70-66. I was there, and it stank. The only things I can really remember about the game were the jeering “Reeeh-bels, Reeeh-bels” cries from 70 percent of the crowd and the long walk to the car afterwards.

My Facebook status later that night properly expressed my feelings: “I’m going to throw myself off of the Empire State Building and pray that I land on a UNLV fan.”

Yes, UNLV fans aren’t too fond of BYU fans, but it’s the animosity to all the schools they play that really gets me. In December 2011, I went to a UNLV game against some not-so-great school from central Arkansas. The opposing team wasn’t going to win, and everyone knew it. Despite that obvious fact, upon the introductions of the other school, the entire Rebel student section turned its back to the court, and each student raised his or her hand, flipping off the opposing team.

Vegas’ lack of professional sports teams means that my fanhood is spread abroad: I’m a Green Bay Packers fan, a San Francisco Giants fan and, once I was accepted to BYU, a Cougars fan.

I have friends who are currently at the Y and hate it. Maybe it’s my full-blown loyalty for everything I love, but I would not attend a school that I did not like. My happiness is very important to me, and I avoid things that stand in its way.

There are also the students who couldn’t care less about sports and team loyalty — that’s totally fine. I may not fully understand your lack of interest, but I’m sure you have passions of equal caliber in other subjects.

Maybe somewhere deep in my soul, I’m just bummed that I don’t have a hometown team to happily cheer for, but my devotion is 100 percent committed to Brigham Young and his merry band of Cougars.