BYU gymnastics sent off seniors scoring a 195.500 in their final home meet against University of Utah and North Carolina State.

BYU started out strong, four of the six gymnasts scoring above a 9.8 on vault. Makenzie Johnson and Eliane Kulczyk led the Cougars with a 9.825. Both Utah and North Carolina State had falls on bars and beam, but this did not stop Utah from taking first place by half a point after the first rotation. Utah was able to offset the falls on beam with two scores of 9.875 by Tory Wilson and Mary Lofgren. North Carolina State did not score in the 9.8’s to keep up with BYU and Utah, but started the event with a 9.750. 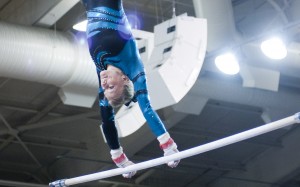 Kulczyk connected her skills on bar tying her career high of 9.825 on the bar. Wensel stuck her landing and received loud cheers from the crowd. Her career high of 9.850 was matched by Haylee Rollins in the subsequent routine, the highest scores on bars for the Cougars.

“Sarah [Wensel] for four years have been a good competitor for us, and this has by far been her best,” coach Brad Cattermole said. “She’s in great shape, she’s high energy and wants to be out there. She’s everything you want in a senior.”

Early in the third rotation, Utah posted two 9.925 scores, the highest marks of the event by Georgia Dabritz and Nansy Damianova. The crowd went wild when Wilson posted a score of 9.950, the best score BYU has competed against all season. North Carolina State continued to improve, posting their highest scores on floor of the night. Brittni Watkins posted a 9.850, the highest score for her team. Summer Raymond and Johnson both scored 9.8’s for BYU.

The fourth rotation began with a 9.8 for BYU by Johnson. Bain kept the momentum going with a 9.850 on this same event. Rollins closed the night with the highest score for the Cougars of a 9.875, tying her career high. Utah gymnasts all scored above a 9.8 on bars for the third meet of the night. North Carolina State finished on vault, ending the meet with two scores in the 9.8’s.

“It was fun (and) was a great meet to have a senior night,” senior Kaitlin Hoffman said, “We had a lot of fans so it just felt really good to have all that support.”