The Cougars will travel to Loyola Marymount to play their last regular game of the season.

Despite losing the last two games, the Cougars are encouraged by their recent play and unity. 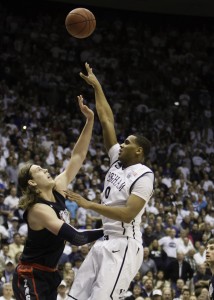 “We’re sharing the ball… If you look at the tape from two weeks ago when we played San Diego and San Francisco, we’re playing 100 times better now,” Brock Zylstra said.

BYU crushed the Lions in their previous meeting on Jan. 3 in a 92–51 victory, but BYU coach Dave Rose still considers them a challenge on Saturday.

“We need to get a win here and get on a positive note to have some confidence going into the tournament in Vegas,” Rose said. “We’ll have a challenge on Saturday. That’s a really talented team that’s had some really tough luck.”

The game will tip off on Saturday at 8 p.m PST at the Albert Gersten Pavillion with a live broadcast on ESPNU and KSL radio.