Following a heartbreaking loss to the St. Mary’s Gaels, the BYU men’s basketball team will have to make necessary adjustments as they prepare to take on No. 2 Gonzaga.

The Zags have moved up eight spots in the nation since their last meeting, going from No. 10 to No. 2. 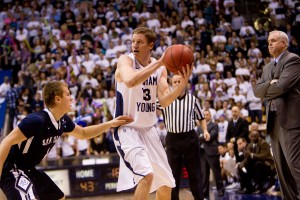 “They haven’t lost since Butler,” Brock Zylstra said. “They deserve their ranking, they’re a great team. They deserve number two.”

They won their last 10 games and will be the highest ranked team to ever come to the Marriott Center.

“It’s a special time for us and our team because not often do you get a team, even in the top 10 in your own place, so to have the No. 2 team in the country is pretty special,” Craig Cusick said.

In their previous meeting, the Cougars were routed by the Bulldogs in a lopsided 83-63 loss at “The Kennel.” Gonzaga’s forwards Kelly Olynyk and Elias Harris combined for a total of 51 points and 19 rebounds.

“(Olynyk) is a great player, an elite guy,” Brandon Davies said. “It was tough to get him stopped. They were just playing great, individually and as a team.”

Tyler Haws hopes to bounce back from his worse offensive game of the season against Gonzaga, 0-9 FG, as he only scored one point against the Bulldogs, which came off a free throw.

BYU coach Dave Rose credits Gonzaga’s consistency to their success and knows it will be tough to stop.

“Our transition defense has to be better,” Rose said. “They scored the first five or six baskets in transition, so we have to slow them down.”

The game will be a “White-Out” and BYU fans will come dressed in white. Seniors Craig Cusick, Brandon Davies, Brock Zylstra along with Stephen Rogers and Chris Collinsworth, both who had career-ending injuries, will also be honored in their last home game of the season.

“It’s a big game, so it kind of drowns out the feelings of it being my last game here on this floor,” Davies said. “But like every game, I’m going to give it my all. It has a lot of sentimental value to it, but at the same time, we’re coming in with a job to do.”

Tip-off will be on Thursday at the Marriott Center at 9 p.m MST. The game will be broadcast live on ESPN2 and KSL radio.