This rivalry resulted in a large SUU student crowd, sporting red t-shirts and anti-BYU signs. The SUU support was not able to deter BYU from winning the meet 195.825-194.075.

The first rotation proved to be extremely successful for both teams. The BYU Cougars started on vault, with all scores above a 9.725. Freshman Eliane Kulczyk was the last competitor on vault, scoring a 9.825 and clenching a lead over SUU. Freshman Mikaela Jones also scored in the 9.8’s range, with a career high of 9.800. The Thunderbirds started the meet on the bars, with one score in the 9.8’s range. The Cougars lead by a half point after the first rotation.

BYU increased their lead over SUU after the second rotation. Four BYU gymnasts scored in the 9.8’s range on the bars. Megan Bain stuck her landing to tie her career high score of 9.850, as did freshman Marguerite Lindstrom with a 9.750. Raquel Willman and Haylee Rollins also stuck landings to score a 9.850 and 9.800 respectively. Sarah Yandow Wensel also scored a 9.800. The Thunderbirds were also able to score three 9.8 scores on vault but trailed the Cougars on both events. Jamie Armijo, Rochelle Bernier and Michaela Chernoch scored in the 9.8’s for the Thunderbirds. 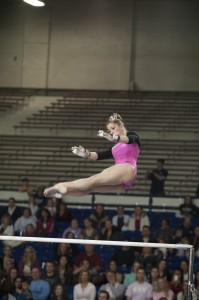 Both teams had lower scores on the third rotation. Sophomore Ashley Follett competed first for the Cougars to resounding cheers from her teammates. Follett scored a 9.750, the second highest score for the Cougars. Bain scored a 9.825, the highest score for the Cougars. All athletes were able to avoid falls on the beam. SUU had a slow start on floor with scores in the 9.5’s and 9.6’s. The Thunderbirds displayed a wide array of choreography with music from congo to heart-pounding bass. Armijo and Chernoch scored 9.825 and 9.875 respectively, the highest scores for SUU on this event. SUU was able to close the gap between the two teams after this event, by one-half point.

BYU pulled further ahead of SUU in the last rotation to win the meet. Makenzie Johnson had a 9.825 career high on floor, leading the Cougars to their best event score of the night.

“I just had to remember even when you’re having bad days you have to give it your all so that you know you can do it in competition,” Johnson said.

Wensel also scored a 9.825. All-around gymnast Willman had a 9.850 on floor, grasping the number one place for the all-around competition. Willman was extremely close to topping her all-around score, with a 39.225

“I had a little bit of trouble on beam, but I stayed on,” Willman said. “I’m just happy with myself all-around. A 39 is a good score.”

Haylee Rollins had the highest score on the floor, with a 9.875. SUU had several falls on beam, sealing the meet outcome. Caitlin Kennedy and Trejo scored 9.8’s on beam for SUU but, these scores were not enough to close the gap between the two teams.