Provo City Council’s approval of a zoning change on the south border of BYU campus has opened the door for another large housing project to be built on 580 E. 800 North.

The construction of the seven-story complex that will house about 700 tenants raises concern for those who predict a housing glut based on changing student enrollment since the LDS missionary age change. Although the nature of the enrollment changes are uncertain, changes have already shown themselves as students leaving on missions scramble to sell their housing contracts in an already saturated market.

Despite this, the city council unanimously approved the rezoning for the housing along with the addition of a commercial zone on Feb. 5.

Bill Peperone, Provo City’s community development planning director, said the housing complex is not related to how many people are living in the area as much as where they can live in relation to campus.

“It’s just a matter of relocating students from other parts of town,” he said. “The idea is actually to have enough student housing on that side of campus that it’s its own zone, a place where students want to live,” Peperone said.

Along with the housing development proposal, part of the convenience for students is supposed to be the development of a small commercial area as well. Although the projected use is still unknown, Peperone suggested that the 8,000 square feet reserved for commercial use would be used at least in part for restaurants.

Residents are also concerned the construction will exacerbate existing parking problems, as some of them expressed to the city council when the area’s owner and developer, Glen Rowland, first requested the zone change in December 2012. Rowland has declined to comment on the recent approval of his real estate plans or possible complications. 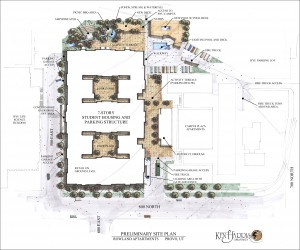 This concept sketch shows an aerial view of plans for the new apartment complex and its surroundings. (Illustration courtesy Sean Allen)

In the lot where the housing complex will be built now stand six single-family houses rented out to students. These houses, owned by Rowland, will be torn down to make room for the complex and its accompanying 575 parking stalls. Construction will start this spring or summer and be complete within two years.

The city council will consider a second development, owned by a separate party, at 900 E. 743 North, during its upcoming March 5 meeting, said Matt Taylor, the council executive director. This complex would house over 300 tenants and have almost 230 parking stalls. The area that would be developed is a little over an acre.