Marcus Ellison loved playing basketball in high school. When he came to BYU, he was excited to play organized basketball again. But this time, he plays with the women.

Six men comprise the practice squad that helps the BYU women’s basketball team improve. Many schools around the country have men practice with women because it increases the toughness of the team.

“They’re (men) way more athletic, and they’re more skilled, so it makes us as a team get a lot better when we have to defend them or they guard us,” BYU women’s coach Jeff Judkins said. “It makes our practices and the things we’re doing way more competitive. It’s a big advantage for us to be able to have that. Our success comes from that.”

For each practice, the men also learn the plays of the Cougars’ next opponent so that the women are ready for whatever is thrown at them. There are six men on the practice squad, but only around four come each day. The men team up with the women on the team who are red-shirting as well as with the walk-on players.

The men for the practice team are usually found by word of mouth. Tyler Stokes, a senior accounting major from Mt. Shasta, Calif., has been on the practice team for three years because he was spotted by one of the women’s coaches.

“I was just playing pickup in the (Richards Building) one day, and the girls were practicing next door,” Stokes said. “After we played, one of the assistant coaches came up to me and my friend and asked if we wanted to play with them.”

The team holds a tryout for eight to 10 men who are interested in playing with the women’s team to see how they mesh with the women and with each other. Once five or six men are chosen, they need to meet the same NCAA requirements that the student athletes meet in order to be on the team. When they are declared eligible, the men are able to play.

“We don’t get paid,” Stokes said. “We are just here to have fun and help them get better.” 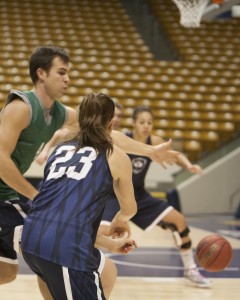 It is often surprising for some people to hear that men are practicing with the BYU women’s basketball team. Sometimes, it is assumed that men are generally more athletic than women; however, the men have come to learn that the players are skilled.

“I think the boys have realized that our girls are pretty good players too,” Judkins said. “It’s not like they can dominate (the women).”

One of the practice players is Ellison, a junior from Tillamook, Ore., who is majoring in public relations. He says all of the players are tough to play against.

“Any of the posts are really, really tough,” Ellison said. “They’re big, they know how to use their bodies. They know how to push you around. When they’re confident, they are just beasts out there, all of them. Technically, I should say a post (is the hardest to play against), but Haley (Steed) is just so crazy good. You’d think with her height I could swat her every time, but she’s just so well-seasoned.”

This is Ellison’s first season on the practice squad, but already he has gained a lot of respect for the women and how they play.

“It’s fun to get to know them,” Ellison said. “It takes a really good person to be in school and playing a sport, for some, like Jen (Hamson), two sports, and to still be friendly and great.”

When Jason Sandvik, a junior from Portland, Ore., who is majoring in mathematics, tells his friends about being on the practice team, he has to explain the situation a little more.

“I tell my buddies I play ball just about every day for an hour and a half, two hours, and they’re super jealous,” Sandvik said. “When I tell people that I practice with the women’s team, they generally raise eyebrows at first. They’re a little confused, they don’t know what that means. But when I explain it to them, they’re generally really jealous because they would like to be playing.”

For Sandvik, being on the practice team is about more than a good workout and making new friends.

“To learn from all of the coaches, watch what they do, watch how they coach, ultimately, that is something I’d like to do someday, coach basketball,” Sandvik said. “Being around it has been invaluable (and) incredible.”

The men on the practice team are grateful for this experience. They have made new friends and learned more about the sport they love.