Elder Donald L. Hallstrom of the Presidency of the Seventy of The Church of Jesus Christ of Latter-day Saints began his devotional address Tuesday by highlighting the good that BYU has brought into his life, the lives of its students and the world beyond.

“I am confident the Lord is well pleased with BYU collectively,” he said. “Let each of us individually be a positive contributor to the Lord’s joy in this institution.”

Describing his responsibility as a speaker and an emissary of the Lord, he stated that while he accepted his task, the full weight of the success of his devotional address did not fall on his shoulders.

”Some may leave inspired, others not,” he said. “It is really our choice. Each of us has access to the inspiration and revelation that can come to us directly from the Spirit, unfiltered by a speaker. All have different needs and circumstances, and the Spirit can effectively communicate with each of us.“

He continued to describe the necessity of reverence in valuing that communication from the Spirit. While describing reverence, he emphasized that it was not merely quietly sitting, but keeping an attitude of respect and love for Heavenly Father.

”Do not confuse reverence with being quiet,” Elder Hallstrom said. “Of course, there are times and places when reverence is shown by not speaking, or by using hushed tones.  Also, in the correct setting and circumstance, being boisterous and reverent are not conflicting.”

He further elaborated on the importance of keeping a reverent mindset throughout the week, not just on Sundays. One of the methods of doing so that he mentioned was through public worship, such as in Church meetings.

“In each of these meetings, we pray, we teach, we testify and we edify, all with the purpose of increasing our understanding of our Father in Heaven, Jesus the Christ and the Holy Spirit,” he said. “We then have the responsibility to translate that ever-increasing knowledge into wisdom, to continually lessen the gap between what we know and how we live.”

Elder Hallstrom then listed a number of temptations and distractions that can keep participants in public worship from being fully engaged, such as texting, tweeting and emailing.

“If we are guilty of any of these mistakes, what we are doing is reducing, perhaps eliminating the ability of the Spirit to communicate with us,” he said. “And then we wonder why we are not edified by sacrament services and other Church meetings.”

Another means of elevating reverence Elder Hallstrom described was through family worship. In his travels on Church assignments, he said he has often heard of the difficulties that local priesthood leaders have in holding family prayer and family home evening with their children’s and spouse’s busy schedules.

“The spirit of the First Presidency’s counsel is that if we are so busy doing good things that we do not have time for the essential things, we must find solutions,” Elder Hallstrom said. “When children are raised with reverence — when they see parents whose lives are reverent — they are more likely to follow this divine pattern.“

As a part of personal worship, Elder Hallstrom said that never using any of the names for God inappropriately is a sign of reverence. In addition to using the names in appropriate ways, he suggested that speaking them properly could be an important part of someone’s personal worship as well.

“I, of course, am not suggesting that this important statement of authority be said in some theatrical show,” he said. “Simply that it is sincerely and clearly expressed with our lips, with our mind and with our heart. That will bring spiritual power to our supplications and teachings.”

He shared an experience from before he was called as a General Authority when he was able to be a part of a temple rededication that many General Authorities participated in, including President Spencer W. Kimball.

“I watched him teach, testify and prophesy with authority and with power,” Elder Hallstrom said. “I saw his tireless effort to minister to ‘the one,’ asking to meet privately with individuals he noticed in meetings or along the way. I witnessed him continually used as an instrument in the hands of God.”

“My dear friends, I testify that this knowledge has made all the difference in my life and in our family,” Elder Hallstrom said. “I hasten to add, it has not magically made us without blemish, and it has not necessarily made life easy. That would be contrary to God’s plan.”

Instead, he said it has given him and his family a “perfect brightness of hope.” This hope, as well as those experiences he has gotten from his public and family worship, has helped his family develop an attitude of reverence.

“There has never been a thought of giving up, quitting, or retreating,” Elder Hallstrom said. “I wish the same for you.” 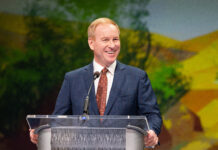 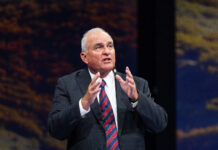 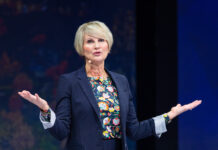 Associate dean encourages students to use influence, strength for good