BYU scored eight tries against Texas A&M in the Las Vegas Invitational Saturday and finished the game with a score of 44-5.

The game intensified early on with a quick score in the first three minutes. However, an early yellow card by wing Jeff Ott in the 11th minute halted the quick pace. The pace picked back up as wing Will Taylor, freshmen scrum half Luke Mocke and All-American Seki Kofe all scored as well. BYU led at the half 24-0, but four more tries contributed by Kyle Sumison, Chris Wernli, David Williams and Andrew Carver closed the game at 44 to 5.

“It was an average performance today from a team that’ s trying to find its identity,” head coach David Smyth said in a press release. “We need to protect the ball better and be more clinical on the attack. The effort is there, we just need to be more rugby savvy.” 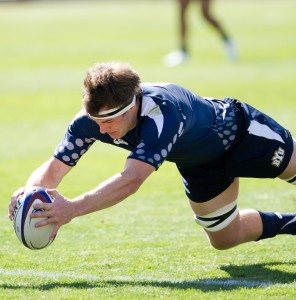 The Aggies are known for being a well-coached and very disciplined team, which is good preparation for the upcoming games against the Super League teams like the Old Puget Sound and the Denver Barbarians.

“The next few games will be very challenging,” Coach Wayne Tarawhiti said. “The boys will definitely be prepared both physically and mentally this week.”

BYU’s next game will be against the Old Puget Sound in St. George at the Dixie Invitational on Saturday, Feb. 16.