IRVINE, Calif. (AP) — Southern California authorities were investigating hundreds of tips Monday after offering a $1 million reward for information leading to the arrest of a fugitive ex-police officer wanted in the slayings of three people.

Along with responding to routine calls for service, police have been protecting dozens of families considered possible targets of Dorner, based on his alleged Facebook rant against those he held responsible for ending his career with the LAPD five years ago.

“Our dedication to catch this killer remains steadfast,” Los Angeles Mayor Antonio Villaraigosa said. “We will not tolerate this reign of terror.”

Police and city officials believe the $1 million reward, raised from both public and private sources, will encourage the public to stay vigilant.

“This is not about catching a fugitive suspect, it’s about preventing a future crime, most likely a murder,” LAPD Chief Charlie Beck said. “This is an act, make no mistake about it, of domestic terrorism.”

Beck deflected questions about whether the reward would be paid if Dorner was found dead or alive. He called the phrase “ugly” and said he hoped no one else was injured in the ordeal, including the suspect.

As the search dragged on, worrisome questions emerged: How long could the intense search be sustained? And, if Dorner keeps evading capture, how do authorities protect dozens of former police colleagues?

LAPD Cmdr. Andrew Smith said the department has deployed 50 protection details to guard officers and their families who were deemed possible targets.

And there are no plans to reduce protection until Dorner is in custody, Los Angeles police Sgt. Rudy Lopez said.

“We realize it costs money and it gets expensive,” said Chuck Drago, a Florida-based police consultant. “But this is as clear of a threat as you can get. The money is always an issue but not when it’s somebody’s life at stake.”

One tip led police to surround and evacuate a Lowe’s Home Improvement store on Sunday in the San Fernando Valley, but a search yielded no evidence that Dorner had been there.

Residents remained on edge in suburban Irvine, where the first two killings occurred. Some residents have kept their children at home, others no longer walk their dogs at night.

“If he did come around this corner, what could happen? We’re in the crossfire, with the cops right there,” said Irvine resident Joe Palacio, who lives down the street from the home of retired police Capt. Randal Quan, who is being protected.

Monica Quan and her fiance were found shot dead on Feb. 3 in Irvine. Dorner was named as the suspect on Wednesday.

Two law enforcement officers who requested anonymity because of the ongoing investigation told The Associated Press they were trying to determine if Dorner made a call telling Randal Quan that he should have done a better job protecting his daughter.

The violence escalated Thursday, when police say Dorner got into a shootout with police in Corona, grazing an LAPD officer’s head with a bullet before escaping. Authorities believe Dorner then used a rifle to ambush two Riverside police officers, killing one and seriously wounding another.

Until Sunday, police had withheld the names of victims, fearing Dorner might target their families. But Riverside police said the officer killed was Michael Crain, 34, an ex-Marine and 11-year department veteran.

Officials decided to proceed with the identification and public memorial despite the possible dangers, Riverside police Chief Sergio Diaz said.

“We’re not going to fail our officer and our hero,” Diaz said. “We’re going to bury him.”

In Torrance, a pickup truck was peppered with police bullets during the manhunt, prompting a lawyer for the driver to accuse officers of being reckless.

Surfer Dan Perdue was driving to the beach Thursday when his Honda Ridgeline was stopped by officers guarding the home of a law enforcement official.

After driving away, the Ridgeline was hit by a squad car. It spun around and officers began shooting.

A police statement said officers took appropriate action as Perdue’s truck, which resembled the Nissan Titan of Dorner, was leaving the area.

Late last week, the manhunt focused on Big Bear in the San Bernardino Mountains, where authorities found Dorner’s burned-out truck with weapons and camping gear inside.

Though Dorner has not been found, Beck said Sunday that Big Bear remained his most likely location, and that planning may have helped him elude authorities. 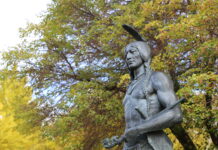