Public transit continues to remain simple and affordable across Utah as Isis and Utah Transit Authority continue to offer free rides through the mobile app. 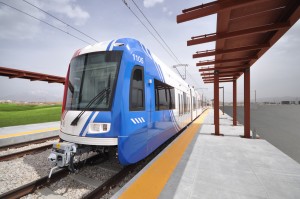 This promotion was originally designed to last through Jan. 31. However, the success seen made those at Isis consider extending the promotion. Isis app users can now ride free on busses, Trax and FrontRunner through March 31.

Gerry Carpenter, spokesperson for UTA, said Isis chose Utah as a test market for the app based on prerequisites within the state and is glad to see success in Salt Lake City.

“UTA already had a system in place that was compatible with mobile wallets,” Carpenter said. “Activate the wallet and get a free ride.”

Isis is a mobile wallet app, such as Google Wallet, which stores credit and debit card information on phones with near field communication chips. Then, tap the phone to the reader and wait for the green light to verify the charge.

Salt Lake City and Austin are pilot markets for this program, and there has been success in more than just public transit. Carpenter said other companies throughout Salt Lake have partnered with Isis to offer promotions for app users.

Currently, Isis is only available on select Android devices through Verizon, AT&T and T-Mobile, which is disadvantageous for iPhone and Sprint users wanting a free ride on the new FrontRunner. However, Isis plans to release an iPhone-compatible case in the near future with a built-in NFC chip.