BYU’s Young Company is bringing traditional Shakespeare to a younger audience with its upcoming production of “Henry V.”

The Young Company’s play is a 50-minute adaptation of Shakespeare’s “Henry V” catered toward elementary-age audiences. They will perform at local elementary schools throughout the semester and at the Harris Fine Arts Center from Feb. 6 to 16.

“Henry V” is a period piece that tells of Henry’s rise to power. Henry’s claim to both the throne of Britain and France leads to a string of several battles, which make up the plot of the play. 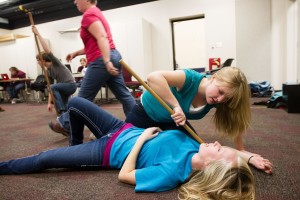 While “Henry V” is a traditional Shakesperean piece, the Young Company is directing its performance to audiences both old and young. More modern styles of dress and movement help make “Henry V” a production for all ages.

Matt Fife, a theater arts studies major from Midlothian, Va., plays the Duke of Exeter in the production. Fife said he thinks the production is a great way to help younger audiences develop a love of theater and Shakespeare.

“Our main goal is to make sure that younger audiences leave feeling like they love Shakespeare,” Fife said. “Some people think the language of Shakespeare is difficult to understand, but we’re making sure that what we say is very clear. We are focusing on telling the story so people of all ages can understand.”

Mackenzie Larsen, a sophomore from Brigham City, said she thinks the production is suitable for all ages.

Larsen has the challenging task of playing Henry in this production. Henry is traditionally a male role, but Larsen said she believes changing the gender of the main character amplifies conflict in the play.

“‘Henry V’ from a woman’s perspective is really interesting because not only am I having to step up and be king, but I’m also having to prove that a woman can do the job,” Larsen said.

Megan Jones, the director of “Henry V,” said she thinks having a woman play the title role in a Shakespearean play will make the plot more understandable for a wider audience.

“Frequently Shakespeare, because it is dated and because men usually play the roles, becomes less accessible to people,” Jones said. “We’re touring to elementary schools where at least half of them are going to be women. So when we can show them a powerful, emotional and yet amazing woman, then why not do that?”

Tickets for “Henry V” may be purchased online or at the box office in the HFAC. For more information on the production, visit the website.

Broadway shows return to the stage