The BYU Career Fair is one of several strategies used by students to find postgraduate employment in a difficult economic environment.

Some BYU students have found careers with the recommendations of BYU professors or through successful internships, while others have taken advantage of BYU’s early graduation in April and many simply benefit from having a BYU degree on their transcripts. This enthusiasm for BYU studentsn was seen firsthand at the BYU Career Fair on Jan. 30. 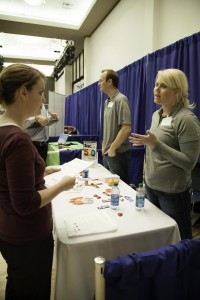 “The students are the best,” said John Sperry, CEO at Mindshare Technologies, who attended the career fair for the first time this year. “They add great value to our company, so it’s easy to keep hiring them.”

Sperry, a BYU grad, said more than half of his company’s employees are BYU graduates, many of whom are hired through an aggressive internship program.

Other companies also began attending the BYU Career Fair after successful experiences with BYU alumni. The Alaska State Troopers came at the suggestion of a captain who had graduated from BYU.

“It was productive,” said Bryan Barlow, lieutenant in the Alaska state troopers, adding that since they recruit nationwide, they only attend the most beneficial events.

Barlow said they try to recruit more heavily from this part of the country because of the similar climate and lifestyle. He cited the importance of honesty, high moral standards, professionalism and a willingness to work hard as qualities in prospective employees.

Heidi Vogeler, career counselor at the University Career Services office, heard success stories from Wednesday’s fair. Steve Hardy of Bluehost hired two students at the fair itself, both of whom had already graduated.

Scott Lyman, a finance student from Cedar Hills, had a less direct approach. He used the career services website to research companies and then went hunting for internships.

Lyman said 60 percent of people in his major get hired through internships, making it the most common and effective way to search for a career.

“They’re shopping around just as much as you are,” Lyman said.

The career fair hosted 105 companies, although the career services office closed registration early due to a lack of space, which may have prevented more companies from attending. Approximately 2,000 students attended.

“It was a little bit hectic,” said Vogeler.

Vogeler said that although services and events from the career services office are useful, the office is trying to rebrand itself from being considered career placement.

“It’s more about developing careers and resources for us and helping students be able to place themselves,” Vogeler said.

The university career services office is located at 2400 Wilkinson Student Center and careers.byu.edu.

Education Week: Seminary and Institute director encourages young adults to look out for ‘flags’ when searching for eternal companion