As she reads the note, she looks around the classroom to see who sent it. A cute guy in the corner smiles at her. Blushing, she writes, “Yes, I am available on Friday night,” and passes the note back across the class. No one realizes it, but those two just might be engaged in three weeks.

While the whirlwind romance sounds like an amazing fairy tale, it is closer to reality here at BYU than many would guess. But how do people know they are making the right choices and setting the grounds for a healthy relationship? 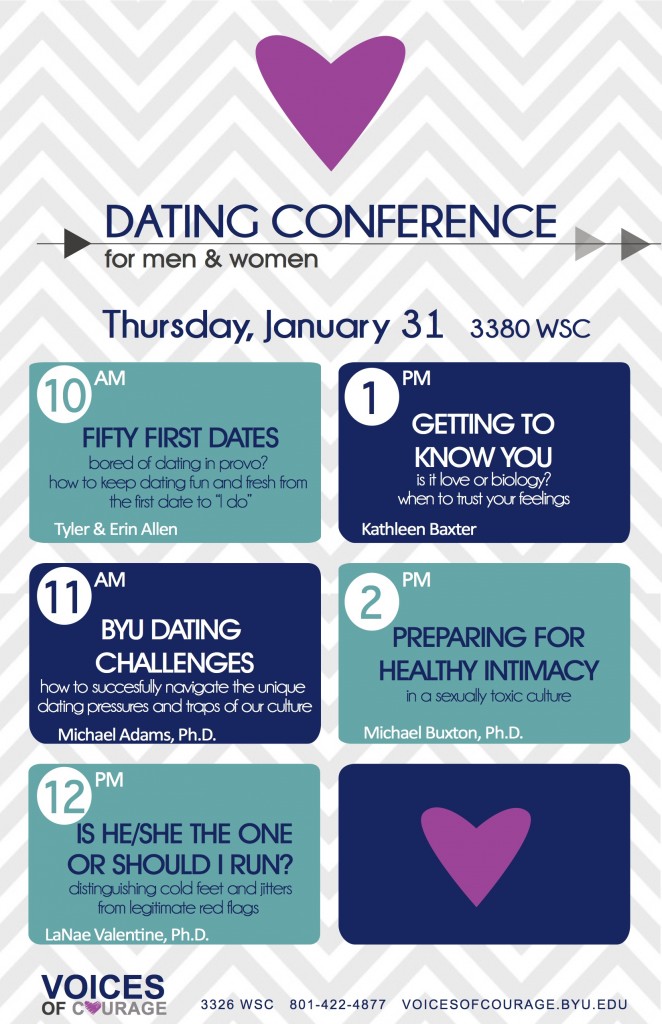 Erica Tanner, a senior from Texas majoring in dietetics, has been working at Women’s Services and Resources since last semester as a nutrition consultant. While admitting that dating is sometimes a fluffy topic, she encourages men and women to attend the conference.

“It actually is important, and I feel like they approach it in a way that’s not so fluffy,” Tanner said. “It does really impact your future because you date who you’re going to marry. And the speakers have definitely seen enough tough relationships to know what they’re talking about.”

Kathleen Baxter, a graduate student in the Marriage and Family Therapy program, is a clinician in the Women’s Services office. Baxter will present the topic “Getting to know you,” which focuses on the importance of getting to know someone well before making the decision to marry them.

Baxter said that couples who jump into marriage without spending time getting to know each other may be hurting their chances for success.

“I see those couples in therapy when they come back 15 years later and they are struggling because they’re questioning when times get hard,” Baxter said. “Instead of, ‘We took our time, I know this person. Times are hard now, but I took my time making this decision and I’m committed to it,’ they always go back to, ‘Woah, did I go too fast, was there someone else for me?'”

LaNae Valentine, director of Women’s Service and Resources, will be presenting the topic “Is he/she the one or should I run?” While Valentine said the conference will have a positive focus on dating and preparing for marriage, she will discuss red flags that signal problems in a relationship.

“I also wanted to focus on being aware of danger signs and some of those red flags that sometimes people don’t want to see,” Valentine said. “(To) help people distinguish between a real legitimate thing to be concerned about, or something (that is) … not really that big of a deal.”

For more information about Women’s Services and Resources, visit the website at wsr.byu.edu.