President Barack Obama pushed for climate action and defended entitlement programs in a speech that was heavy on liberal ideals during his second inaugural address Monday morning.

The president’s strong defense of entitlement programs such as Medicare and social security fall in line with the agenda of the Democratic Party and statements he made in a press conference last week calling on Congress to raise the debt ceiling in March. 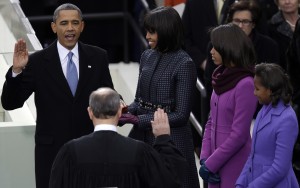 “The (entitlement programs) do not sap our initiative, they strengthen us,” Obama said. “They do not make us a nation of takers, they free us to take the risks that make this country great.”

Obama’s call to preserve entitlements comes at a time when Congress is heavily divided over the deficit issue and where to make cuts.

“His vision for the next four years is clear: defend a broken system, ignore the fiscal crisis and drive future generations farther into debt,” Sen. Mike Lee, R-Utah, said in a press release following the inaugural address.

Lee called the president’s speech “a disappointing reprise of his divisive campaign rhetoric.”

“Rather than define us as a nation, he chose to divide us as a people,” Lee said. “This is not the approach of a leader attempting to find solutions to problems but rather the tactics of a partisan trying to pick political fights.”

Alex Chandler, a senior from Littleton, Colo., studying political science, hosted an inauguration watch party Monday night. The attendees were about half Republican and half Democrat. Chandler said he loved the President’s speech and thought Senator Lee was too critical of Obama. “I think (the speech) was capturing his vision for where he wants to take this country, and the reason I loved it most was because I felt like it was an invitation for all of us to act,” Chandler said. “He wasn’t saying we need to see eye to eye on all of these issues.”

Obama spoke of the need for climate action. “We will respond to the threat of climate change, knowing that the failure to do so would betray our children and future generations,” he said. “The path towards sustainable energy sources will be long and sometimes difficult. But America cannot resist this transition. … We cannot cede to other nations the technology that will power new jobs and new industries. We must claim its promise. That’s how we will maintain our economic vitality.”

Several BYU students participating in the BYU Washington Seminar program had the opportunity to attend the 2013 presidential inauguration in Washington, D.C.

Emily Kinard, a junior studying political science, is spending the semester interning at the Republican National Committee headquarters. Kinard campaigned for Mitt Romney at the Romney headquarters in Orem and in Indianapolis. Though she was disappointed by the results, Kinard was touched by the spirit of the inauguration ceremonies.

“Watching the peaceful transfer of power that makes America unique was a moving experience,” Kinard said. “The atmosphere was such that there was no question: the people had spoken, and their voices were heard. Regardless of one’s political leanings, seeing democracy in action firsthand like that was really exciting.”