The BYU women’s basketball team fell to Gonzaga 59-74 in Spokane, Wash. on Thursday night despite a strong second half surge. 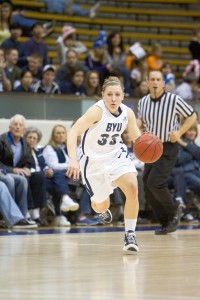 [/media-credit]”We came out sluggish and they came out really aggressive,” BYU head coach Jeff Judkins said. “We have to be more focused and ready to play when we’re on the road.”

The first half was in complete control of Gonzaga. BYU committed 11 turnovers to let the Bulldogs start off the game with 10 unanswered points. BYU was down 19-37 going into halftime. Gonzaga was shooting 52 percent from the field and 60 percent from beyond the arc at the half.

The beginning of the second half started off the same way with the Bulldogs seeming to take over the game again, but the Cougars battled back with a 17-0 run. BYU went from being down by as much as 27 points to cutting the lead to only nine points with a three-pointer from guard Haley Steed. After five straight Gonzaga points to push the lead back up to 14, BYU was never able to get back in the game.

“We were in a deep hole in the second half,” BYU forward Morgan Bailey said. “We fought hard, but we just couldn’t get out of it.”

Bailey was a key player in the game with a career high 18 points from shooting 7/13 from the field (1/2 from the arc). She also grabbed five rebounds. Steed also played well, finishing with 18 points – four from downtown – and five assists. Guard Ashley Garfield led the team in rebounds with eight. Garfield also had eight points.

Gonzaga dominated near the rim. The Bulldogs had 26 points in the paint and earned 14 second chance points.

“We didn’t handle their pressure well,” Judkins said. “I’m glad we fought back and were more aggressive in the second half.”

A bright spot for BYU was its free throw shooting. The Cougars were perfect from the charity stripe in the first half and was 12-17 in the second half. A few pairs of free throws made by guard Stephanie Seaborn helped chip away at Gonzaga’s lead. Free throws, however, are not enough.

Along with Seaborn’s four points, BYU’s bench accounted for 30 of its 59 points. Gonzaga’s bench scored 11 of the team’s 74 points.

BYU will rest for a week before continuing WCC play on Thursday with a home game against Loyola Marymount. Tip-off in the Marriott Center is at 7:00 p.m. MST.