“Following a long break, these two meets will let us see who followed their holiday workouts,” head coach Patrick Shane said in a press release. “But there will also be some surprises. Some of our athletes will get great marks we didn’t expect.”

As these were the first meets of the season, athletes now know where they measured up and where they need to improve. Some athletes had some surprise results. Fan Fan Charles set a new personal record in the 60-meter final with a new time of 6.75 seconds.

“The way Fan Fan (Charles) ran today was phenomenal,” head coach Mark Robison said in a press release. “We haven’t had a 60m time like that in a long time. We were also able to make it through without any serious injuries, which is good. I’m pleased how things went, and we will see a lot of improvement between this and our next meet.” 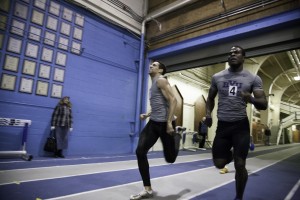 Brianna French and Brittany Critchfield took second and third in the indoor discus with respective marks of 44.38 meters and 41.16 meters.

“Overall it was a successful meet,” head coach Mark Robison said in a press release. “I was pleased with a lot of our athletes throughout the weekend.”

The Cougars head to New Mexico in the upcoming weekend for the Cherry and Silver Invitational.