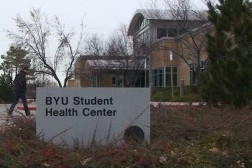 BYU students have always had relatively limited options for health insurance: they can either subscribe to the BYU Student Health Plan or sign a waiver to opt out and be on private insurance. But even then there are complications.

The Health Center has never billed private insurance companies directly, due to the high volume and myriad of different plans. But now, due to increased demand and booming enrollment, BYU Health Services has decided to make the transition toward accommodating the needs of more students.

Aaron Larson, assistant director of the BYU Student Health Center, said there is no official date to begin the new policy, but plans are underway. “We’re not waiting for anything; we just need to finish negotiating contracts with the seven major private health insurance companies BYU will work with,” Larson said. That negotiation, officials say, takes months per company but should be completed soon.

Students aren’t the only ones who will benefit from the new policy. Lab manager Cheryl Deming said it will both decrease inconvenience and boost business. “We have students coming here so that they can see the doctor on their insurance plan, but when they have to have their lab work done, their insurance will only cover one of the bigger laboratories in the United States … if they could just come here, it would be so much better for them!” Deming said.

An official start date has not been announced, but officials like Larson confirm that it will happen once contracts are negotiated, and “sooner rather than later.”