It’s a cruel reality check for some students once the robe comes off after graduation and they are put to the test to see if the last four-plus years they spent chasing down a degree was worth all the sleepless nights and student loans.

Putting your degree to good use after graduating and entering the real world might not be completely dependent on your desire to work.

Recent studies show that students just out of college are struggling more than ever to find jobs that require a degree, and the situation is getting worse. Some students, however, don’t let completing college affect their chances of getting a job.

“I saw my chance to do what I’ve always wanted to, and I took it,” said Joel Ragar, CEO of ForeUP, an innovative golf management software company he and a partner pursued instead of graduating from BYU. “I always knew I would start my own company, but what I didn’t know is that I wouldn’t need a degree to do it. I took what I learned from my education along the way and, with a few bumps and bruises, turned the dream of running my own company into a reality.”

Not all are as fortunate as Ragar, and some graduates spend months, even years, looking for work where they can put a degree to good use.

Employment rates for new college graduates have fallen drastically in the last two years, as well as have starting salaries for those who can find work. What’s more, only half of the jobs secured by new graduates require a college degree, stirring debates about whether higher education is worth it after all.

A study released in May 2011 by the John J. Heldrich Center for Workforce Development at Rutgers University showed that the median starting salary for students graduating from four-year colleges in 2009 and 2010 was $27,000, down from $30,000 for those who entered the work force in 2006 to 2008. Even before the effects of inflation, that is a decline of nearly 10 percent.

Students know the job market is shrinking and becoming ever more competitive. That’s why some are deciding the best option is to wait it out while in school.

“I knew there weren’t going to be many job prospects for me until I got my Ph.D.,” said Travis Patterson, 23, a 2010 graduate of California State University, Fullerton.

Patterson works as an administrative assistant for a property management company while continuing to study psychology in graduate school. His current job has little to do with his degree.

“It helps pay my rent and tuition,” he said, “And that’s what matters.” 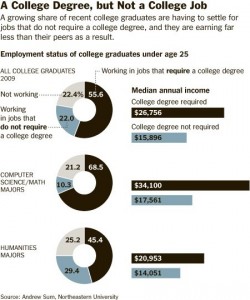 For those students who are unsure where their degree will take them and if it will yield a substantial enough return on investment after the debt they might accrue, there are always two sides to a story.

Damon Pullman, 34, a 2001 graduate in Russian with a business minor from BYU, is a prime example that not all students use their degree in their professional career but rather to initially get their foot in the door.

Following graduation, Pullman came upon some great opportunities, one of which potentially involved using his expertise in Russian to work for the FBI for a very minimal government salary. This opportunity, although aligning perfectly with his major, was not substantial enough to support his financial goals and was not where he felt like he could make the greatest impact.

There was something greater out there for Pullman to be a part of. While he searched for his niche, he settled on selling computers for Lenovo. The experience and knowledge he gained while working for Lenovo gave him what he needed to propel himself into a career in pharmaceuticals.

“A degree should be looked at as a tool,” Pullman said. “You can use it or toss it in the corner to rust.”