Although BYU students only get 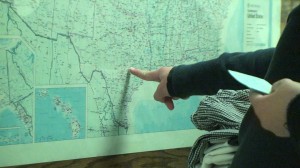 three weekdays off school for the Thanksgiving break, many of them with immediate family who live out of state think it’s worth the drive. Of BYU’s 34,000-member student body, only one third are Utah natives, leaving more than 20,000 who hail from other states.

In the basement of the Wilkinson Student Center on campus is an enormous United States map dubbed “The Ride Board,” a kind of pre-internet social network that facilitates interstate carpooling for hundreds of student travelers each year. Students wanting a ride place a yellow card in the appropriate box, organized geographically, and wait for a driver headed in the same direction to come along. Chelsea Compton, a sophomore studying nursing, is seeking a ride home to Everett, Washington. “It’s cheaper [when] more people are in the car…and it won’t be my car,” Compton said.

The system is mutually beneficial; riders chip in for gas and, in turn, save on the wear and tear of transporting their own vehicle. One advertising student from Houston, Joshua Pacheco, has made a small business out of long-distance carpooling. Pacheco said he regularly makes out-of-state trips with friends, sometimes even a few times per month. In fact, he bought an eight-passenger Toyota Sequoia SUV just for that purpose, which, he said, has paid for itself. “I’ve been to L.A., New York, and Las Vegas. I enjoy traveling…and planning is the key,” Pacheco said.

Next week will be Joshua’s first time using the BYU Ride Board, but he’s not feeling nervous about carrying strangers. “I have no reservations,” he said. “If you feel comfortable with the people you’re with, it’s great.”

This year’s most popular destinations, not counting Utah’s neighboring states, are California, with 25 travelers, and Chicago with five. Two students are even cruising back East, all the way to Virginia and New Jersey—nearly 2,000 miles and 40 hours of driving.

If you’re planning to leave the state for Thanksgiving next week, experienced travelers say to get to know your fellow passengers before leaving on the trip. Leave early in the morning and take turns driving to avoid drowsy accidents. Just be sure to make it back in time for school on Monday.