On Nov. 6, people lined up at election polls across the United States to vote for their candidate of choice. As the votes are tallied, news affiliates painted states either in red or blue, signifying the winning candidate of that state.

BYU students have differing opinions on the significance of red (for the Republican party) and blue (for the Democratic party) as symbolic representations of their political affiliation.

Whitney Wing, a senior from San Diego, Calif., majoring in economics, said she does not connect with her “blue” home state.

“I come from a very, very blue state,” she said. “I think it made me more of a moderate Republican, whereas living in Utah made me a more conservative Republican. I would definitely say that where you live has a huge impact on your political views.” 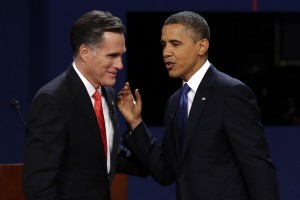 [/media-credit]Wing said she believes the colors red and blue are important for branding purposes during the election. Wing is a business strategy minor and said there are strategic implications behind the use of political colors.

“A majority of people go off of brand image and associate with things their friends and family are doing,” she said. “When you have people associate with a different-colored state, especially uninformed voters, they’ll kind of go along with what everybody else is doing.”

Wing said she shows her political affiliation through supporting her candidate of choice. Wing is a participant of the 7-Eleven political poll. In a news release from 7-Eleven, the company called the poll “7-Election,” allowing customers to purchase coffee cups marked blue for Obama and red for Romney.

Mukesh Bindraban, owner of the University Ave. 7-Eleven, said he sees more students come in during the evening to purchase cups. He said 7-Eleven offers drinks to both hot chocolate and coffee consumers.

According to the 7-Election website, Obama was winning by 59 percent, with Romney at 41 percent.

“I think that people see this election as being very significant,” Borgolthaus said.