Muse Music Cafe has always made being involved with the local community part of its mantra. Hosting a Battle of the Bands that also benefits local outreach programs is just another way Muse fulfills that goal.

Muse has teamed up with Gretsch Guitars to host a Battle of the Bands, which will be a five-day competition running from Monday, Nov. 5 to Friday, Nov. 9. Four bands will play each night, and finalists will be chosen. On Saturday, the finalists will battle to win a Gretsch guitar package valued at over $7,000.

Velocirapture is a band that is in it to win it. Gary Argyle, the guitarist, said the band wants the Gretsch guitars so badly.

“We like to play anytime we can,” Argyle said. “We always like the chance of getting new fans, but this time we can do that and have a chance to win some sweet prizes.” 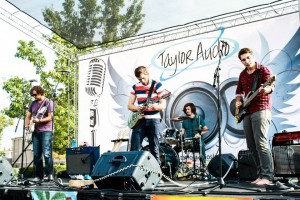 “We’re just going to keep on playing,” Inkley said. “This is how we’re going to get bigger and bigger and get more well known. We just have to do it one step at a time, and this competition is our kickstart for that.”

This competition has an incentive for audiences members as well. Spectators who bring canned food will have their names put into a raffle for a chance to win a Gretsch Brian Setzer Hot Rod guitar in tangerine valued at $3,600. The drawing will be held on Saturday night. The canned food will be donated to The Center for Women & Children in Crisis, a local Provo nonprofit organization. Debby Phillips, co-owner of Muse, is anxious for this event to be a success. If it’s the success they’re expecting it to be, Gretsch will tentatively host another event in the spring.

“We wanted to make this a community event,” Phillips said. “The canned food drive, with a Battle of the Bands, with a good prize incentive is a perfect opportunity. It all goes back to our goal of giving back. We really believe in giving back and doing what we can to help. We invite all of the community to help us and enjoy art.”

Phillips said putting together a competitive line-up was hard.

“We were looking for quality musicians who showed potential, who really knocked our socks off,” Phillips said. “Familiar bands and new bands submitted entries. We could’ve drawn the competitors from a hat and done a random order, but we wanted to create a show where all the competitors had a chance to shine for the judges.”

Guitarist Colin Greslin said the band is looking forward to connecting to the Provo music scene because of the great things they’ve heard about it.

“When we looked at the list, and we didn’t recognize a lot of the competition, we were excited for the chance to meet a lot of cool bands,” Greslin said. “We’ve heard the Provo audiences are very supportive, much like our audiences back home.”

In regards to the charity this competition provides, Greslin said the band likes the idea that music can be used to give to such a great cause.

“The outreach is how we heard about the competition,” Greslin said. “It’s an awesome thing, and we’re privileged to be a part of it.”

Another band competing is Eli Whitney, a rock alternative band from Orem. Drummer Perry Burton said the band is most excited for the networking opportunities afforded from this competition.

“We’ve done Battle of the Bands in the past, and they’re always fun,” Burton said. “More than anything we love meeting a ton of other really cool bands. We use shows like this as a networking tool. We make friends that we end up playing future shows with who help promote us and we’ll help promote them.”

As far as the community outreach is concerned, Casey Keele, the bass guitarist for Eli Whitney, and Burton agree that the band seeks for ways to give back.

“We’ve definitely been on the receiving end of charity,” Keele said. “We love that music can offer something like that. We’re ready to support, and we’re stoked to do more.”