ATLANTIC CITY, N.J. (AP) — A furious Hurricane Sandy began the westward lurch that forecasters feared and took dead aim at New Jersey and Delaware on Monday, washing away part of the Atlantic City boardwalk, putting the presidential campaign on hold and threatening to cripple Wall Street and the New York subway system with an epic surge of seawater.

Gaining speed and power through the day, the storm knocked out electricity to more than 1 million people and figured to upend life for tens of millions more. It clobbered the ghost-town cities of the Northeast corridor, from Washington to Boston, with stinging rain and gusts of more than 60 mph.

As it drew near, Sandymoved closer to converging with two cold-weather systems to form a hellish superstorm of snow, rain and wind. Forecasters warned of 20-foot waves bashing into the Chicago lakefront and up to 3 feet of snow in West Virginia. 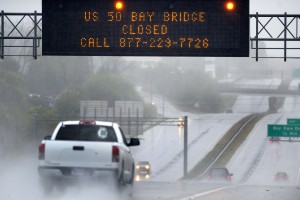 [Associated Press] A sign informs motorists along U.S. Route 50 that Maryland’s Chesapeake Bay Bridge, which connects the state’s eastern and western shores, is closed because of winds from Hurricane Sandy Monday, Oct. 29, 2012. Hurricane Sandy continued on its path Monday, as the storm forced the shutdown of mass transit, schools and financial markets, sending coastal residents fleeing, and threatening a dangerous mix of high winds and soaking rain.

Airlines canceled 10,000 flights, disrupting the plans of travelers all over the world, and storm damage was projected at $10 billion to $20 billion, meaning it could prove to be one of the costliest natural disasters in U.S. history.

President Barack Obama and Republican challenger Mitt Romney canceled their campaign appearances at the very height of the race, with just over a week to go before Election Day. The president pledged the government’s help and made a direct plea from the White House to those in the storm’s path.

“When they tell you to evacuate, you need to evacuate,” he said. “Don’t delay, don’t pause, don’t question the instructions that are being given, because this is a powerful storm.”

Sandy, which killed 69 people in the Caribbean before making its way up the Atlantic, began to hook left at midday and was about 55 miles southeast of Cape May, N.J., in the afternoon, moving at almost 30 mph — faster than forecasters had expected.

By early evening, the hurricane was expected to barrel into southern New Jersey or Delaware. That would put New York City and Long Island along its dangerous northeastern wall, facing perhaps 11 feet of water.

While the hurricane’s 90 mph winds registered as only a Category 1 on a scale of five, it packed “astoundingly low” barometric pressure, giving it terrific energy to push water inland, said Kerry Emanuel, a professor of meteorology at MIT.

“We are looking at the highest storm surges ever recorded” in the Northeast, said Jeff Masters, meteorology director for Weather Underground, a private forecasting service. “The energy of the storm surge is off the charts, basically.”

Hours before landfall, there was evidence of the storm’s power.

In New York City, a construction crane atop a luxury high-rise collapsed in the wind and dangled precariously over the streets. Forecasters said the wind atop the building may have been close to 95 mph.

Off North Carolina, a replica of the 18th-century sailing ship HMS Bounty was caught in the storm’s wrath, and 14 crew members were rescued by helicopter from rubber lifeboats bobbing in 18-foot seas. Two other crew members were missing. They were believed to be wearing survival suits capable of protecting them from cold water for 15 hours.

At Cape May, at the southern tip of New Jersey, water sloshed over the seawall, and it punched through dunes in other seaside communities. Sandy also put most of Atlantic City under water and tore away an old section of its historic boardwalk.

In Maryland, at least 100 feet of a fishing pier at the beach resort of Ocean City was destroyed, and Gov. Martin O’Malley said there would be devastating flooding from the swollen Chesapeake Bay.

“There will be people who die and are killed in this storm,” he said.

At least half a million people had been ordered to evacuate, including 375,000 from low-lying parts of New York City, and by the afternoon authorities were warning that it could be too late for people who had not left already.

Millions of people stayed home from work. Sheila Gladden evacuated her home in Philadelphia’s flood-prone Eastwick neighborhood, which took on 5½ feet of water during Hurricane Floyd in 1999, and headed for a hotel.

“I’m not going through this again,” she said.

Those who stayed behind had few ways to get out. New York’s subways, which serve 5 million people a day, were shut down. The Holland Tunnel connecting New York to New Jersey was closed, as was a tunnel between Brooklyn and Manhattan.

Even so, authorities worried that salt water would seep through the boarded-up street grates above the subway and through the sandbags placed at subway entrances, crippling the electrical connections needed to operate the subway. Authorities also worried that the surge of seawater could damage the underground electrical and communications lines in lower Manhattan that are vital to the nation’s financial center.

Stock and bond markets were closed Monday and Tuesday, the first shutdown since the days after the Sept. 11 attacks in 2001 and the first two-day closing of the stock market because of weather since a blizzard in 1888. The New York Stock Exchange is inside the mandatory evacuation zone in lower Manhattan, blocks from New York Harbor.

If the storm reaches the higher estimate of $20 billion in damage, that would put it ahead of Hurricane Irene, which raked the Northeast in August 2011 and caused $16 billion in damage. Hurricane Katrina, which killed 1,200 people, cost $108 billion.