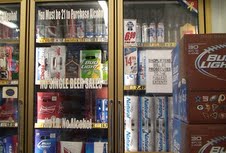 Beer was on the minds of the Orem city council last night as they considered an ordinance change that would allow beer sales on Sunday. Business owners were hopeful, but the suds will stay locked up on Sundays for at least the next month.

Both community and council opinions are split between allowing the sale of beer on Sundays and keeping alcohol regulations the same in Orem. However, for now, the law isn’t changing.

Bar owner Lorie Bolton found a loophole.  The state says she can serve beer at the Hitching Post on Sundays until Orem city makes a decision regarding beer sales on Sunday.

The state rewrote liquor laws in 2010 and allows for all restaurants and taverns to sell hard liquor on Sunday, yet the Orem city code still says Sunday beer sales are not allowed.

The proposed city amendment would line Orem up with state law and allow the sale of beer in restaurants, bars, grocery and convenience stores.

“What’s the difference between Sundays or any other day? They will drink at home or if they come here they are going to drink,” Bolton says.

Nearby, American Fork and Provo both allow Sunday beer sales and the director of public safety says other cities with Sunday sales have not seen an increase of alcohol related crimes. Other Orem convenience store owners say they have to chain up their cold beer on Sundays to prevent theft.

Bolton says without beer sales on Sunday she will lose 20 percent of her profits and agrees with community members that say the change will standardize rules across Utah County.  Others say that this change would lower the high standard Orem has.

“The more you do against the Lord’s will, the less you reverence that day. I am for reverencing that day (by) keeping… (the) standard (of) not selling alcohol,” said Waine Burr an Orem community member.

The city council ended up deciding that they need more time to consider the matter and postponed their vote until next month.

The new vote will be on November 13th. Council members say they want to hear more from those who live in the city. In the meantime, state law will permit beer sales for those who appeal to the state law.