Picture a world where students come home from school and dinner is ready without any effort on their part.

This situation is the world of a dinner group where students seek to alleviate the stress of cooking by rotating dinner chefs.

“I look forward to the end of the day because I know that I’m going to have a meal and that it’s going to be tasty,” Wutzke said. “It makes me have a smile on my face all day.”

A dinner group has two elements: a social gathering and a dining experience. Groups of people decide how many days of the week they want to have dinner group and then create a schedule for who cooks each day. A member makes the dinner and then everyone comes together and enjoys the food and the company. 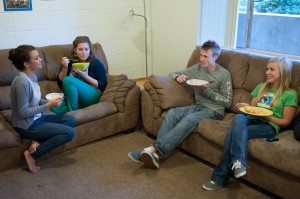 Wutzke’s dinner group meets four days a week and consists of eight people, five boys and three girls. This arrangement makes it so Wutzke only cooks once every other week. When the dinner group formed, they decided to make ground rules, Wutzke said. Every meal has to have a protein or meat, a grain and a fruit or a vegetable.

“I think right off the bat you want to make sure everyone is on the same page when it comes to the nutrition of the meal,” Wutzke said. “You want people that like cooking and want to make good food.”

In addition to the good food, Wutzke enjoys the company of a dinner group.

“What’s fun about it is I feel like we’ve built our own little family,” Wutzke said. “It’s just fun to eat with other people and to have that time to socialize and build relationships with people.”

Rylee Carling, an English teaching major from Gilbert, Ariz., said she has liked her dinner group that formed this semester but she has also had some grievances. One night when it was Carling’s turn to cook, six members of her ten-member dinner group texted her saying they would not be able to attend.

“We have such a fun group, and we always have a lot of fun when we get together, so it’s kind of lame when people can’t come,” Carling said.

Despite this, she said she still loves her dinner group.

“I’ve actually been quite impressed with everyone’s cooking skills,” Carling said. “At first I was like ‘Boys are going to cook for me, really?’  But it’s turned out to be really good.”

Carling’s group also has traditions such as if a member kisses someone, they have to bring ice cream to share with the group. Also, during dinner every group member says one happy part of their day and one sad part.

“You just have to set down what you want upfront,” James said.  “If you want fancier meals I think that’s important to talk about so you don’t just get spaghetti every night. It can be really fun but I can see how a dinner group can be really lame and basic.”

James said his experience in past dinner groups leads him to think there are not any disadvantages to being in one.

“Your dinners only take about 30 minutes and you only have to cook once every few weeks,” James said.  “Financially it’s cheaper because it’s cheaper to buy stuff in bulk than just buy small things. It’s better to eat with people than alone. It’s flexible too; I can’t think of anything bad.”