In a world where modest is not considered the hottest, many wouldn’t expect the visual arts students at BYU, where figure drawing is not done using nude models, to be some of the best in the country.

BYU’s Department of Visual Arts is third in the nation and has found a way to work within the Honor Code while still remaining competitive with students in secular programs across the country.

Robert Barrett, a distinguished painter, illustrator and professor of illustration at BYU, said although visual art students at BYU are not exposed to the graphic material that is prevalent in other art programs, it does not hinder the students’ chances for a future career.[media-credit name=”Chris Bunker” align=”alignright” width=”218″] 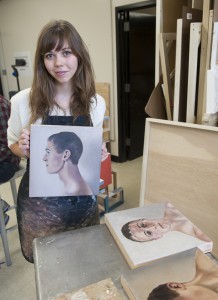 “We have students at all the studios, from Disney to DreamWorks, to Sony Pictures Imageworks and Blue Sky Studios,” Barrett said. “They place a huge emphasis on the human figure. Our students are known for drawing the figure really well, despite the fact that we don’t normally draw with models that are totally nude.”

Barrett clarified how censorship in an art student’s education should be taken into context.

“This happens in physics or science or chemistry, that you have to contextualize things,” he said. “A nude image in and of itself is not salacious or pornographic. Now some may choose to see it that way, but I think that is a limitation of their training or their background.”

Stephanie Secrist, a recent graduate of BYU from Loveland, Colo., explained her work as a model for visual arts classes.

“It was never uncomfortable because of the people in the class or the teacher,” she said. “The only thing that made it uncomfortable sometimes was my own experience of being scantily clad around people. The teachers and students are very professional and it was all about art and form and about grace and beauty.”

Secrist, who modeled for two semesters for a sculpture class and a figure drawing class, said that she was able to choose what she wore as a model and she wore a bikini.

Stephanie explained how visual art students could still learn all about the human figure without having to use a nude model.

“For some people, it’s less distracting because you are focused on angles and body parts instead of certain body parts,” she said.

Daniel Barney, an art education professor at BYU and professional artist, researcher and educator, described censoring as not just a result of the Honor Code.

“I think that art is not monitored so severely because I think students and faculty do that on their own,” Barney said. “We’re really good at self-censoring, and I think that’s a good thing.”

Barney pointed out that although graphic imagery is part of many other art institutions, the art students at BYU choose to self-censor.

“I can’t imagine my students ever wanting to deal with those kinds of images, and if they did, I think they understand that this is not the venue to do that,” he said. “They would go somewhere else if they were interested in certain kinds of images.”

Barney also explained that employers might appreciate students that are able to self-censor artwork for specific venues and audiences.

“While it’s important to have diversity in a community, there’s still a lot of expectations for teachers,” he said. “People who hire teachers from our program know that we’re able to be self-censored. I think students need to understand that as an artist, there are different places to exhibit their work and different audiences. Not all work would be appropriate for every audience. We need to work within specific expectations. We censor ourselves.”

Eric Smith, from Orland Park, Ill., studying pre-animation, explained that even though he is not a member of The Church of Jesus Christ of Latter-day Saints, he chose to study art at BYU as opposed to other schools around the nation.

“BYU’s animation program is top notch,” he said. “It’s third in the nation. Pixar and Disney and Dreamworks know good students come out of that, so they always recruit from our school.”

Smith commented that art students go into the program with open eyes, knowing the diverse subject material in art.