As the leaves change, but before the trees are barren, groups of roommates head up the canyon to take “family pictures,” but this trend is no longer specific to women.

Female roommates are the typical candidates for capturing roommate bonding and love on film, but there are a few men who don’t want this stereotype to cut them out of making roommate memories.

Matthew Rogers, a student from Lindon majoring in marketing, said he and his roommates needed to make their apartment feel more like a home. They figured the difference between their apartment walls and their walls at home was the lack of family love displayed in portraits on the wall. They decided to take their own family photos.

“Well, honestly we took them partly just to be funny,” Rogers said. “But also we needed decorations in our apartment.” 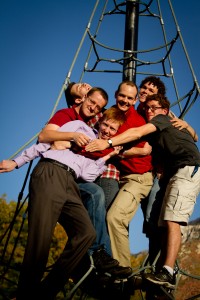 [/media-credit]Rogers has been friends with his roommates for years, and they thought they could poke fun at the tradition typical of female roommates while still serving the purpose of roommate bonding.

The stereotype they had in mind is that when the fall leaves come out, so do the matching sweaters and boots. Pictures of women roommates in the autumnal scenery then tend to adorn Facebook.

“Oh, absolutely! That is the whole-hearted truth,” Rogers said when asked if he had satirical motives to mock girl roommate pictures.

Mica Smith, a photographer living in the Orem area, has shot photos for male roommates. She said she thought it was a little weird that it was a group of only men, but she ended up laughing the whole time. She said that although she was a little hesitant, photography is photography and she wouldn’t turn down a job because of the subject.

“The guys were being totally funny,” Smith said. “They all had hilarious personalities, so they were joking the whole time.”

While this is a small trend, the number of male apartments that are unashamed of their family photos is growing, although not everybody thinks it’s a good idea.

Kaitlin Baer, a student from Salt Lake City studying illustration, does not think it is appropriate for men to be taking “family pictures.”