Facebook
Twitter
Pinterest
WhatsApp
Josh Hanson’s jaw dropped even before President Thomas S. Monson finished making his announcement Saturday. As President Monson, president of The Church of Jesus Christ of Latter-day Saints, led into the big policy change on missionary ages, Hanson could tell something big was about to happen. As the reality of what Monson was saying sunk in, Hanson’s jaw unhinged and froze into a face that openly showed the reaction of many who were listening as intently as he was.

“I had that expression on my face for a few minutes,” Hanson said. “You knew it was coming, and you’re like ‘oh my gosh, is he actually doing this?'”

Within seconds after the announcement that worthy young LDS men could serve missions at 18 and women at 19, cameramen panned over the Conference Center plaza and found Hanson’s face still etched in that frozen surprise. Instantly his stunned face was broadcast all over the world. Within minutes, his face had become a household icon and one of the faces of President Monson’s announcement.

Members throughout the world instantly picked up on his expression as one they had been feeling and could relate to.

“That’s what I’ve been getting a lot,” he said. “The reason that people have grabbed onto it so much was just because they felt the exact same way.”

Hanson, a typical BYU student from Alpine studying chemical engineering, had no idea just how quickly his priceless look would become popular.

“Seconds after they showed us on the television, I started to get text after text coming to my phone saying ‘you should have seen the look on your face — priceless!’ And then 15 minutes after that, no kidding, I started getting messages about a meme that’s up,” Hanson said. “Somebody copied it and was able to take a screen shot and make it into a meme within 20 minutes.”

Within 5 or 10 minutes, to be exact. The creator of the meme was able to post the meme within 10 minutes of seeing Hanson’s face on television.

David Andrus, the man behind the meme, still has the time stamp for when he put it on BYU Memes Facebook page at 10:30 a.m., only 30 minutes after the morning session had begun, and only minutes after the announcement took place.

Even more surprising is that Andrus works for the BYU Fulton School of Engineering as a computer service representative. These two men may have passed each other in the hallways of the Clyde Building, and yet they had no idea the other existed before this meme brought their worlds together.

Equipped with some free online meme software, Andrus created the meme off of what he had seen on TV.

“I saw it come up, I paused my DVR at home, and I just got close enough to the screen where you can’t see the little pause symbol,” said Andrus. “I took the picture with my phone and emailed it to myself.” 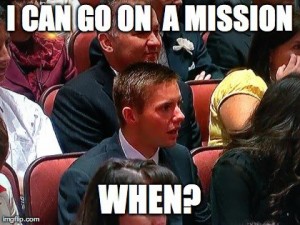 It was as simple as that, and that may have been why Andrus really didn’t expect it to become such a big thing. “I put it up for a joke, and then my wife an hour later is like ‘you know this thing has 2,000 likes already?’ I figured people will think it’s funny, a few people will laugh at it, but I was very surprised when I saw how many likes it was getting, and how many shares … I was like holy cow,” Andrus said.

Hanson was amused by the words of the meme: “I can go on a mission WHEN?” The reality is that Hanson is 22 and already returned from a mission to Russia.

“That was kind of funny, half of the people thought I was under 18,” Hanson said.

Hanson said if he were given the opportunity, he would have taken the chance to serve a mission at 18.

“I think it would have benefited my college career. … I got good grades my freshman year, but the diligence that you learn on your mission helps you get even better grades.”

Although it doesn’t change any of his own plans, he recognizes the effect it has on many other members of the Church, including his brother.

“It changes almost everyone’s plans. My little brother is wanting to finish high school early so he can leave when he turns 18,” said Hanson. “So lots of changes for everyone. It’s really big.”

Realizing just how big of a change this was going to be is the reason he put on the shocked face that would make him famous.

“I figured, looking at him, he’s probably gone on a mission already,” Andrus said. “The shocked look on his face, I just wanted a picture of it in general,” Andrus said. “I thought it was funny, and I was going to put it up on my Facebook page.”

Andrus ended up with only four shares when he posted the meme on his own Facebook, but as soon as he posted it on BYU Meme’s website, the meme became an instant hit. With over 2,000 likes before the first session was over, the popularity of his meme grew exponentially.

And the popularity continues to grow. It’s currently at 1,760 shares and almost 14,000 likes on Facebook, according to Andrus, and that’s just the post on BYU Memes. When combined with all the other places his meme has been shared, including Twitter and other meme sites, it’s impossible to number just how far this meme has gone.

No matter how far it reaches, in the end Hanson just finds it amusing that his face has become so popular and is permanently connected with this announcement. “Funny thing: a face associated with the announcement,” Hanson said.