The meet is scheduled for Oct. 11-13 and will be one of the first meets for the team this fall season. The real tennis season does not start until January so the fall is a more individualistic time. 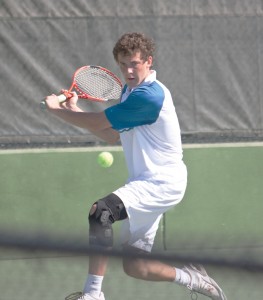 [/media-credit]”The fall season is the individual season because you’re not playing as a team,” Coach Brad Pearce said. “You’re playing for your own rankings in individual tournaments while still representing BYU. It’s a valuable time because they don’t have the pressure that’s associated with winning for the team.”

The pressure can be difficult and was felt by two of BYU’s tennis players last week when they competed in the ITA All-American Tournament at the University of Tulsa. In order to participate in the tournament, Patrick Kawka and Keaton Cullimore had to be either ranked nationally or the best in their region. Although they lost their matches, it was an opportunity to play the best tennis players in the nation.

“Every match in the tournament is like a final game because it is the best players from around the country,” Pearce said. “They had some good takeaways on what they can work on and be better prepared for future matches.”

Kawka, who has played tennis for the last 17 years, is looking forward to the Utah Invitational.

“I am excited for the tournament,” Kawka said. “It’s a very important warm-up tournament because it’s in between other regional tournaments. Not everyone went to Tulsa, so this tournament is an opportunity for our team to get the feel of match play and practice.”

Cullimore, Kawka’s partner in doubles, anticipates a great game against University of Utah, who will be competing in the match as well.

“It’s always exciting to play Utah,” Cullimore said. “I’m always pumped and have the desire to win. If we work hard, our team will have a great season.”

Next week, from Oct. 17-21, will be the Region VII Championship Tournament for the Men’s Tennis team, but for now they are focusing on the Utah Invitational.

“This is a great event where we will be playing other Utah teams that have some very good players,” Pearce said. “We’ve typically done very well at this event and look forward to seeing our players keep that tradition going.”