The BYU marching band played fun and inviting music as students filled the stands and Cosmo threw shirts into the crowd, kicking off the 2012 BYU Homecoming opening ceremonies Tuesday afternoon in the Marriott Center.

BYUSA president Brandon Hatch opened the ceremony by talking about the success BYU continues to have in all areas, and how much talent the students and teachers possess.  Hatch then introduced members of the BYU rugby team, who recently won the national rugby championship and are the Homecoming “Grand Marshalls” this year.

This year’s Homecoming theme, “Of Pillars and Cornerstones,” centers around the Maeser Building on campus, which is 100 years old this year.

Afterward the BYU marching band performed a James Bond medley to celebrate the 50th anniversary of the fictional Bond character. The audience was invited to follow along with the lyrics provided for them on the big screen.

After the performance, the essay winner of the Brimhall essay contest was presented by Elder John H. Groberg and was invited to read the winning essay. The theme of the essay was also “Of Pillars and Cornerstones.”

BYU head football coach Bronco Mendenhall then came and talked about the excellence BYU has shown when it comes to teaching students to excel both scholastically and spiritually. He also talked about Friday’s upcoming football game against undefeated Oregon State.

“We will invite them in and send them on their way with their first loss,” Mendenhall said. 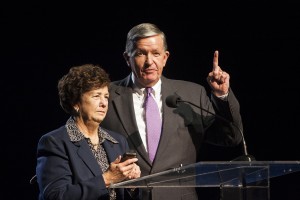 The opening ceremonies concluded with a performance by BYU’s Young Ambassadors, and students were sent off with the “spirit” of Homecoming.