The Mormon Tabernacle Choir is esteemed around the world as one of the best choirs with extreme musical excellence. The reputation of the choir is attributed to great choir members and administrators, one of which is Jerold Ottley. 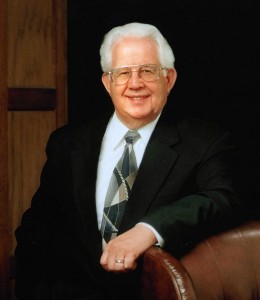 [/media-credit]Ottley was the director of the Mormon Tabernacle choir from 1974 to 1999. It was during this period of time that the choir increased their musical excellence, and earned their world-wide recognition. He will be speaking Oct. 11 for the Honored Alumni Lecture.

All who speak of Ottley and his wife JoAnn remember them as warm, personable and hilarious individuals who exuded musical excellence.

“Humor is natural to me,” Ottley said. “Sometimes… unnatural. But I used it specifically and very intentionally to diffuse situations that were getting intense.”

The beloved choir director described his administration as a time when the demands of the church were increasing, and the choir had to rise and meet the standards.

Members of the choir felt his musical study and excellence allowed them to meet those demands. Ottley, however, emphasizes that the singers are always more important than the director.

“I love them because of their great service, and their willingness,” Ottley said, adding that the volunteer status allows the members to have the freedom to give more of themselves.

“Some performances were more glamorous, but none were more meaningful,” Ottley said.

Ottley turned towards choral music while living in New Zealand during his teenage years. He was an instrumentalist at the time, but attending concerts at the town hall in Auckland, blossomed his absolute love for choral music. In 1998, Ottley had the chance to take the Tabernacle Choir back to that place where his passion for music began.

“It was a highly emotional experience,” Ottley said. “Very difficult to keep my head together and conduct a concert. It was so emotional.”

Ottley spoke of other countries the choir toured. Each one was spoken of as if they each done under Divine instruction, including the tour to Soviet Russia, just 6 weeks before Gorbachev was overthrown.

“We could feel a great sense of yearning for freedom,” Ottley said.

Brian Roberts, a member of the HBLL administration and former choir member, said he thinks the choir almost prepared Russia for the freedom that was coming.

“In every venue, we just brought the house down,” Roberts said.

In 1992, the choir did a Christmas tour in Israel. They had the opportunity for many Israelis and Palestinians to hear the messages they were singing.

Sherry Whadam, a former choir member with Ottley, said that Israel was one of her favorite tours, as they sang in places where Jesus Christ lived and administrated.

“Singing at the Garden Tomb was especially memorable,” Whadam said, not feeling she could accurately describe the emotions she felt.

Peggy Cann, a member of the choir during Ottley’s direction, remembers Ottley’s very last concert with the choir on their European cruise tour.

“To watch him, it was like he was having his own rapture,” Cann said. “He was so elevated and so perfect.”

Ottley has kept his love for music and people thriving since his leaving the choir. He doesn’t see it coming to an end any time soon.

“I’m still trying to find out what retirement is, activities like this [BYU Homecoming] keep me terribly busy,” Ottley said.