Head coach Bronco Mendenhall was all smiles after the game in another stellar performance by his defense as the Cougars beat in-state opponent Utah State 6-3 Friday night.

It’s the second low-scoring, defensive-battle in three weeks for the Cougars.

“You never know how (these games) are going to go, and (these close games) take their toll on me as a head coach,” Mendenhall said in a news conference after the game. “But the team seems to respond to it really well. I’d rather win easy.” 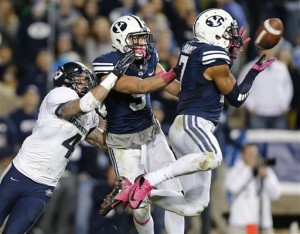 This was the 12th consecutive game that BYU has held their opponent to under 300 yards of offense, and 13 consecutive quarters that the defense has not surrendered a touchdown.

Junior linebacker Kyle Van Noy’s giddy demeanor after the game reflected the confidence the entire defensive unit has been playing with on the field. The defense has been relied on heavily at times, but Van Noy showed zero problems with that.

“I play defense,” Van Noy said jokingly. “I would probably be more happy if the final score was 2-0. I enjoy football. I enjoy low scoring games where the defense is on the line at the end of the game….  There is no other way I would rather have it.”

The Aggies saw their best start to a season since 1978 come to an end as they struggled to find any momentum on offense. They finished with a total of 243 yards on 202 passing and 41 rushing, all season-lows.

That will improve an already impressive defensive mark for the Cougars, who lowered their average points allowed to 8.8 points per game.  BYU is also the No. 1 rush defense in the nation, giving up 50.2 yards per game.

Freshman Taysom Hill earned the start for the second consecutive week over the injured senior Riley Nelson and finished 24-36, 235 yards with one touchdown and one interception.

Hill made big strides today in leading the offense in a tight-scoring affair and exited the field to a loud applause from fans cheering his name by the tunnel to the locker rooms.

“Utah State is really good on defense, and with the exception of the one interception after the personal foul, I thought his decision making was good,” Mendenhall said, assessing his quarterback’s performance. “I thought he threw the ball well, and I thought he managed the game well.”

Mendenhall made no definitive statement regarding which quarterback will start next week against No. 14 Oregon State.

Freshman running back Jamaal Williams made his first career start and played well as he carried the ball 17 times for 71 yards.

Never count out the Cougar defense, especially when they have the goal line at their backs one yard away.

The Aggies found momentum on offense  in the first quarter and drove to the one yard-line.  But once again, the Cougar defense stiffened and denied an Aggie run up the middle for a loss of two yard to force a field goal.

The Cougar defense, two weeks ago against Boise State turned away the Broncos on four consecutive plays from the one-yard line.

The emergence of Ziggy

Senior defensive end Ezekiel “Ziggy” Ansah was once a fun story about an athlete from Ghana who had to get taught how to put on football pads when he joined the Cougar football team in 2010. Now, he is a force surging up NFL draft boards.

The Cougar defense came in knowing it would be a challenge to contain Aggie quarterback Chuckie Keeton and would have to hit him early. Ansah came up big with two sacks in the first half along with another tackle for loss.

“For this season to go by without a knowledge that he didn’t know how to put on his pads three years ago is something else,” Mendenhall said. “You could make a movie about this at some point.”