A three day tournament awaits the women’s golf team next week as the Cougars travel to New Mexico Monday and return Wednesday.

The course to be played is foreign to most of the team, but Assistant Coach Juli Erekson is positive about the players’ ability to do well on it. 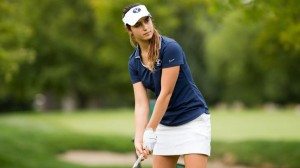 “We have a good opportunity to score there,” Erekson said. “I think they’ve set it up fairly short so people can make a lot of birdies and so that plays to our girls, we like birdies. They’re really looking forward to having a course where they can just go and score on.”

The team hasn’t had a tournament for the last week so they’ve been working hard and playing competitively at practice.

“Pretty much our goal for this season is to commit 100 percent and so in practice we’ve had a lot of head to head competitive drills with consequences so the girls really kind of get that pressure feel,” Erekson said.

Junior Annika Afoa Kahaiali’i has noticed the benefits of this approach to practice.

“Coach has been putting a lot of pressure on us to play well and to finish strong since the last couple of tournaments we haven’t been finishing strong,” Kahaiali’i said. “So she’s kind of been putting an alternative of being punished if we don’t do certain drills, which is really nice because it’ll make us more mentally tough.”

That’s not all the team is doing to ensure that they are mentally equipped for the competition.

“Part of our becoming mentally tough is controlling emotions,” Erekson said. “It all starts with awareness, so we sit down and talk about ‘where during your round did you feel like you succumbed to either a really high or a really low emotion’ and they kind of put themselves in that situation. By doing that they’re fully aware of how they reacted at that time and how they would want to change that reaction in the future.”

Freshman Lea Garner said the new approach in practice helps the team focus on their commitment to shots.

“When we play we write down every shot with a percentage of how we thought we committed to that shot,” Garner said. “Sometimes I’ll think maybe I only committed 80 percent, not all the way but some, and then sometimes I’ll say I committed 100 percent to that shot. We do that and write it down to be aware of what we’re thinking when we’re shooting the ball and how much commitment we have.”

The three day tournament means the Cougars will be hitting 18 holes each day, rather then a 36-18 they have been hitting for the last two tournaments.