The Lovecapades band of BYU students will open for Hoobastank in Salt Lake City at In The Venue on Oct. 10.

Hoobastank, known for its No. 2 hit “The Reason,” will also be playing with Kiss Me Kill Me, another local Utah band.

Colin Rivera, guitarist/singer for the Lovecapades, says playing a show this big is an opportunity afforded by the promoters.

“We’ve played a lot of shows,” Rivera said. “But we feel lucky to get a show as big as this. It’s a mark of success for Provo bands. We’re glad they’re giving us a shot. It’s a good opportunity for us because playing for a band as big as Hoobastank can only get us more attention.”

Playing so many shows has allowed the band to work out its performing kinks. Now that they’re more comfortable playing for larger audiences, the members of the band have a new focus for this show. 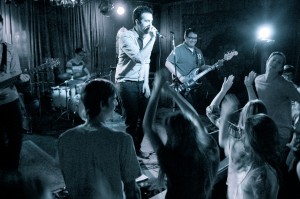 [/media-credit]”We want to make it as entertaining and the best possible show we can,” Rivera said. “We’re going to try out some new performance styles. We’re working out the bits and pieces, but it will be big and it will be cool. There are going to be surprises for a fun night.”

Drummer Justin Curtis is especially excited for this show because he wants to rid himself of the stigma that drummers are not performers. Playing at the back of the stage behind the singer and guitarists does not mean his energy is going to waste, he explained.

“All in all, it’s about playing music we love,” Curtis said. “But my No. 1 priority will be to look and sound as at least, if not the most, excited one on stage.”

Every show it plays teaches Lovecapades something new, even if it’s something they shouldn’t ever do again. The band members agree their interaction with the crowd has taught them the most about performing.

“We’ve given this a lot of thought,” Curtis said. “I once thought it was technique and understanding that makes a musician good. Lately I’ve changed my mind. The best musicians exemplify simplicity. They make the part fit the music, and that’s what I’m going to focus on.”

The bassist, Josh Gishi, has a routine to prepare himself mentally for every show. He has found if he prepares to be upbeat and positive before the show, even if he personally doesn’t play up to par, the show will still be successful.

“The Venue is such a sweet place to play,” Gishi said. “We’re all so stoked to play there, especially for Hoobastank — they’re awesome. We’re grateful for this chance. We love being with friends and playing shows. We’re excited for our fans to bring out their friends. We’ll make it a good time for them.”