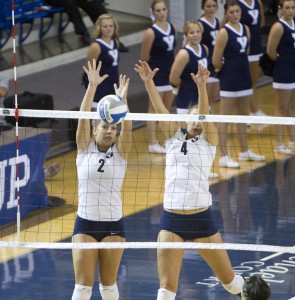 [/media-credit]The No. 16 BYU women’s volleyball team dropped their first two sets against Loyola Marymount Thursday night, but made a huge comeback to win the match 3-2.

The win against LMU improves the Cougars record to 4-1 in the West Coast Conference and 16-1 overall.

Head Coach Shawn Olmstead said he was impressed with his team’s performance and victory.

At the open of the first set LMU slowly pulled ahead. The Cougars worked hard to keep the score close, but were unable to catch up. LMU closed the first set 25-20 with a kill.

The second set opened with LMU taking the lead once again 6-2. Kills by BYU players junior Jennifer Hamson and freshman Alexa Gray slowed LMU’s progress and helped the Cougars tie up the set 13-13. The Cougars were able to pull ahead 17-14, but then lost the lead when LMU had a 6-1 scoring streak. The Cougars were unable to regain the lead and LMU closed the second set 25-21.

Senior Nicole Warner said she had a pep talk with the girls in the locker room before the coaches came in.

“I told the girls, ‘This is not the way we play volleyball. This is not the team we want to be right now. We need to go out and play hard. We have nothing to lose. Let’s show them what we have. Let’s play with heart and just go out and do it,'” Warner said.

In the fourth set, a combination of kills and blocks from the Cougars and attack errors by LMU allowed the Cougars to pull a large lead and win 25-15.

Olmstead said the girls did what they needed to in order to win the match.

“We started making digs,” Olmstead said. “We started blocking more balls. Our attacking got a little better, so our offense was able to run a little more smoothly.”

In the final set of the night, Hamson and Warner put up blocks and kills to give the Cougars a 5-0 start. LMU worked hard to catch back up but was only able to get within three points of the Cougars lead. The Cougars closed the fifth set 15-8, winning the match 3-2.

Warner made 17 blocks against LMU, her career high. The Cougars made their season-high with 22 blocks, while LMU only had two blocks.

Warner said she was really focused during the match and was determined to help her team beat LMU.

“I was really into beating them,” Warner said. “I was thinking, ‘Okay, if I can’t get any kills right now, I’m going to help my team out in any way I can.’ And right then we were getting tons of blocks. I’m just glad I could help out in any way I could to help us win tonight.”

The Cougars next match will be on Thursday against Portland. The match will be held in the Smith Fieldhouse and will begin at 7 p.m.