Supporters of the Provo music scene have the chance to make history.

Salt Lake City’s RAW organization is hosting a competition for local indie artists. The band that receives the most votes by October 15 will move onto the semi-final round in November.

RAW operates in 54 cities across America and Australia, with planned operations in China and Europe in the near future. Each month from February to October, RAW Directors hand-pick and spotlight local talent in each city. At the end of the season, the RAWards competition takes off and invites members of their online community to contribute through voting participation for the RAWards Show. The two-month process takes the top five favorites from each art category from the popular vote, and  narrows it down to the top three nominees from each city.

A show-case semi-final in November will give the community the chance to vote again, and one winner from each city will be chosen. Those who win the semi-final round will go on to be judged by a panel of industry professionals. They will be judged on skill, creativity, wow factor and professionalism. The winner of the event will receive a substantial prize package including consultations with the judges, recording time in Eenie Menie Records, promotional opportunities among others The winning band will also be named the RAW: Musician of the Year. 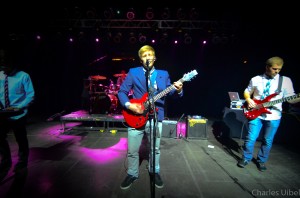 [/media-credit]The Salt Lake City chapter of RAW started in July. Jennifer Chipman, the director of SLC RAW said getting this chapter going has been a huge undertaking.

“Salt Lake City has an awesome community with a lot of talent,” Chipman said. “I’m passionate about the RAW mission, and the launch in Salt Lake City is great for those who have had less opportunities getting out there. I know how hard it can be to get your name out there, so I’m thrilled with the response rate we’ve had.”

RAW is an organization with the goal of giving indie artists the opportunity to showcase their work at mass events. RAW is not an acronym for anything, but it does stand for something. RAW harkens to the artist who is in it simply for the passion, but has gone unnoticed. RAW is not limited to musicians, but showcases art in many forms including photography, fashion and accessories, hair and make-up, film, visual art and performing art. RAW celebrates art in its most naturalistic form and purpose.

Chipman said RAW is a great organization for local indie bands because it offers a chance for a national following. Once an artist has been showcased in one of the 54 city locations, they are eligible to be booked in any of the locations.

“They can really grow their fan base and branch out,” Chipman said. “They can take advantage of being seen by different circles. It really opens a lot of doors to aspiring artists.”

Frontman for Brady Parks and the IndiAnns sees this as the band’s big break in networking.

“With RAW we can play pretty much anywhere we like,” Parks said. “We’re hoping that this competition will give us what we need to gain a national following. RAW is our chance to break out of everything that’s normal and really do something different. We want to get our name as out there as much possible.”

With such a promising push to its musical career looming ahead, Lead singer and guitarist for Red Yeti, Kimball Barker said Red Yeti is ready to step up to the challenge because everything has been a perfect storm since the formation of his band in March.

“This is the perfect opportunity for us to debut our work to so many people,” Barker said. “The chance to play on The Complex — a real, professional stage — is so close. It really depends on how much support we can get. Fans have the chance of essentially making history and pioneering the whole Utah music scene. Ultimately, we’re in it for the love of it. Yes we’re ambitious, but we’re also realistic. We know we can do this if we have the support. We’d like for everyone to like us, but no matter what, we’re gonna rock as usual.”

Red Yeti is relatively new to the music scene. With its namesake paying homage to the band’s primitive mode of transportation, an old pick up truck, Red Yeti has played with bigger names in the music scene. The bands’ primary motives for playing are a love of performing with and for friends, and the personal satisfaction that comes from making music.

Keyboardist, Coleman Edwards said that the more involved Red Yeti is with the fan base, the better it will be.

“Having people participate with us always makes us better,” Edwards said. “We want to share this experience with everyone. Our goal isn’t fame and glory, it’s creating bonds through music. RAW is a good way to do that. Our distinguishing mark is the involvement we want to offer anyone. We play a wide range of music and are open to guest artists. Music is about sharing an experience.”