The team will be wearing black uniforms, created specially by Nike for the homecoming game against Oregon State on Oct. 13. Fans are encouraged to take part in the blackout.

Tradition is the one word that marks the team’s usual uniforms, but fans are caught in a sort of football-uniform snag. Traditional or Modern? That is the question.

[pullquote]“The uniform was designed to have the same striping and maintain an element of tradition, while also creating a fun atmosphere for the team and the fans,” said BYU Head Coach Bronco Mendenhall in the BYU press release. “Our plan is to wear the uniforms for this one game.”[/pullquote] 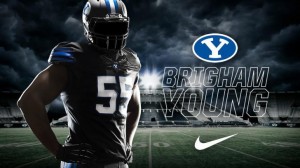 [/media-credit]Throughout the years, BYU’s uniforms have evolved and come full circle. During the golden years at BYU, from about 1980 to 1993, BYU donned the traditional royal blue and white, making us think of some familiar faces — Steve Young, Ty Detmer, Robbie Bosco and Vai Sikahema.

The team then moved on to a series of navy, tan and white combinations, but in 2005, the team turned back to the traditional, ditched the tan and went back to the now-navy and white.

During this season’s homecoming game, the team will take a more modern approach to its uniforms, switching the all-white for the all-black. The team will also wear the recently-trending matted helmet in charcoal gray.

BYU isn’t the only team to have jumped on the Nike Pro Combat bandwagon though. They join the Oregon Ducks, the Georgia Bulldogs and the Boise State Broncos.

The modern twist isn’t a permanent change for the Cougars. After the homecoming game, the athletic department plans to sell the uniforms.

The BYU Bookstore has created a special blackout T-shirt for the game, and the shirts are available at the bookstore and online for purchase.