CAPE CANAVERAL, Fla. (AP) — His blood could boil. His lungs could overinflate. The vessels in his brain could burst. His eyes could hemorrhage.

And, yes, he could break his neck while jumping from a mind-boggling altitude of 23 miles.

But the risk of a gruesome death has never stopped “Fearless Felix” Baumgartner in all his years of skydiving and skyscraper leaping, and it’s not about to now. 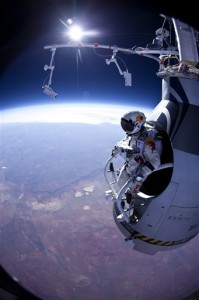 [/media-credit]Next Monday over New Mexico, he will attempt the highest, fastest free fall in history and try to become the first skydiver to break the sound barrier.

“So many unknowns,” Baumgartner says, “but we have solutions to survive.”

The 43-year-old former military parachutist from Austria is hoping to reach 690 mph, or Mach 1, after leaping from his balloon-hoisted capsule over the desert near Roswell.

He will have only a pressurized suit and helmet for protection as he tries to go supersonic 65 years after Chuck Yeager, flying an experimental rocket plane, became the first human to go faster than the speed of sound.

Doctors, engineers and others on Baumgartner’s Red Bull-sponsored team have spent as much as five years studying the risks and believe they have done everything possible to bring him back alive. He has tested out his suit and capsule in two dress rehearsals, jumping from 15 miles in March and 18 miles in July.

Baumgartner will be more than three times higher than the cruising altitude of jetliners when he hops, bunny-style, out of the capsule and into a near-vacuum where there is barely any oxygen and less than 1 percent of the air pressure on Earth.

If all goes well, he will reach the speed of sound in about half a minute at an altitude of around 100,000 feet. Then he will start to slow as the atmosphere gets denser, and after five minutes of free fall, he will pull his main parachute. The entire descent should last 15 to 20 minutes.

He will be rigged with cameras that will provide a live broadcast of the jump via the Internet, meaning countless viewers could end up witnessing a horrific accident.

Baumgartner is insistent on going live with his flight.

“We want to share that with the world,” he says. “It’s like landing on the moon. Why was that live?”

His team of experts—including the current record-holder from a half-century ago, Joe Kittinger, now 84—will convene inside a NASA-style Mission Control in the wee hours Monday for the liftoff of the helium balloon at sunrise.

Clark was married to space shuttle astronaut Laurel Clark, who was killed aboard Columbia while it was returning to Earth in 2003, and he has dedicated himself to improving astronauts’ chances of survival in a high-altitude disaster.

NASA is paying close attention, eager to improve its spacecraft and spacesuits for emergency escape, but is merely an observer; the energy drink maker is footing the bill and will not say how much it is costing.

The No. 1 fear is a breach of Baumgartner’s suit.

If it breaks open—if, say, he bangs into the capsule while jumping or supersonic shock waves batter him—potentially lethal bubbles could form in his bodily fluids. That’s what’s known as boiling blood. A Soviet military officer died in 1962 after jumping from a balloon at 86,000 feet; the visor of his helmet hit the gondola and cracked.

During the descent, the temperature could be as low as minus 70. Baumgartner’s suit will be all he has between his body and the extreme cold.

Then there’s the risk of a flat spin, in which Baumgartner loses control of his body during the free fall and starts spinning. A long, fast spin, if left unchecked, could turn his eyeballs into blood-soaked, reddish-purple orbs, and he could be left temporarily blind. Also, a massive blood clot could form in his brain.

Baumgartner’s team has a plan for every contingency but one: If the balloon ruptures shortly after liftoff because of a gust of wind or something else, the capsule will come crashing down with him inside. He won’t have time to blow the hatch and bail out.

“I have every expectation that he’ll come through this successfully based on our analysis,” Clark says, “but you know, it still is an unknown.”

Kittinger leapt from an open gondola on Aug. 16, 1960, from an altitude of 19.5 miles and reached 614 mph, or Mach 0.9—records that stand to this day. He was a captain in the Air Force, and the military’s Excelsior project was a test bed for the nation’s young space program.

Kittinger has been Baumgartner’s mentor, signing on with this new project after decades of refusing others’ requests.

Fearless Felix insists he would not attempt the jump if the odds were against him.

“I think they underestimate the skills of a skydiver,” says Baumgartner, who has made more than 2,500 jumps from planes, helicopters, landmarks and skyscrapers, with no serious injuries.

If he makes it back in one piece, Baumgartner plans on settling down with his girlfriend and flying helicopters in the U.S. and Austria, performing mountain rescues and firefighting.

“After this,” he promises, “I’m going to retire because I’ve been successfully doing things for the last 25 years and I’m still alive.”